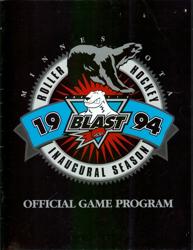 The Roller Hockey International League (RHI) was founded in California by Dennis Murphy while driving through the streets of Los Angeles after he noticed a school yard group of young kids heavily involved in a hockey game on in-line skates. Murphy himself was no stranger to creating new leagues as he is credited for the formation of the American Basketball Association (ABA), and the World Hockey Association (WHA). Murphy, along with his Attorney Larry King co-founded the RHI in the summer of 1991.  Due to the explosive growth of in-line skating, and being the "sport of the nineties", the RHI would expand across the country to 12 teams with three divisions and a 14-game schedule, including Minnesota.  In November of 1993 Minnesota migrated to a new habitat in hockey, going from the cold climate of professional ice hockey to the warm climate of professional roller hockey, and joined the RHI league, and was part of the Central Division in the Eastern Conference. The owners of Blast Entertainment named the team: Minnesota Arctic Blast with a fun-loving polar bear as the primary logo after the Minnesota Mosquitoes, Ice and Loons were rejected by Minnesota's new roller hockey franchise. "We really liked the idea of a polar bear so we went with that concept, plus it also helped to have an animated character as a mascot", said Richard Valentine of Valentine Design and Marketing in Edina, MN whom created the logo. "The Arctic Blast had a NHL-NBA level of logo that had durability, and was rather irreverant". In 1994 RHI expanded from 12 teams to 24 that included a Minnesota franchise - the Arctic Blast and was joined by 12 other teams. RHI had to add two conferences with divisions as follows: 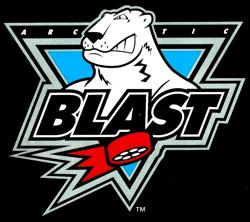 The Minnesota Artic Blast made their Roller Hockey International debut on June 6th 1994 in the new expanded RHI league vs. the Atlanta Fire Ants (Atlanta Fire Ants were also part of the 1994 league expansion as well) at the Target Center in Minneapolis, Minnesota to a lopsided 23-3 win!  After the 1994 season the franchise took a year of hibernation while planning to move into a new league. That never happened so the team rejoined the RHI in 1996. In 1995 the Arctic Blast were replaced by the Minnesota Blue Ox before the Arctic Blast returned to the RHI in 1996. The Blue Ox had a lot of the Arctic Blast players on their roster with some new faces. The Blue Ox played there 1995 season home games at Aldrich Arena in Maplewood, MN which consisted of 12 home games. Fans were able to enjoy free parking, in-line skating in the arena before each home game, with "plenty of tailgating and entertainment opportunites". After the 1996 season the Arctic Blast would not return to the RHI and then in 1998 the RHI took a leave of absence and returned in 1999 with the Minnesota Blue Ox returning, but RHI sadly folded after the 1999 season. Because the league folded it forced the Arctic Blast to cease operations. The RHI attempted to come back in 2000 as Major League Hockey (MLH), but they couldn't get things together to start the season. At this time, there isn't anything to indicate that RHI or any other nation wide pro league will play any time in the near future. Both the Arctic Blast and the Minnesota Blue Ox played at a time in Minnesota's hockey history following the departure of the Minnesota North Stars to Dallas, and the IHL's Minnesota Moose.  Hungry hockey fans didn't have to wait long following the RHI league folding as the Minnesota WIld franchise was granted on June 25, 1997 for a return for major pro NHL hockey in Minnesota.

February 8, 1994:  Final drawing of the Minnesota Artic Blast of the Roller Hockey International League was presented to the ownership group, Cities Hockey Inc. by Valentine Designs and Marketing. 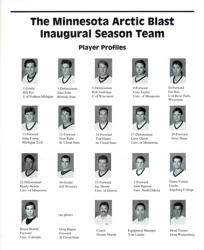 March 14, 1994:  Cities Hockey Inc. introduces the new RHI team name: MN Arctic Blast, and the logo to the local media and the state of Minnesota.  In addition to the local news and papers, owners Dennis Murphy & Ralph Backstrom were in attendance to announce the team name and that they would be playing their home games at the Target Center in Minneapolis, MN.

April 21, 1994: Minnesota Arctic Blast announce they are offering tryouts open to the public.

May 7, 1994: Over 40 players come out to tryout for the new professional roller hockey team - the Minnesota Arctic Blast.

May 16, 1994: The Arctic Blast opens inaugural training camp with more than 40 players in attendance.  The camp ran through June 5th. 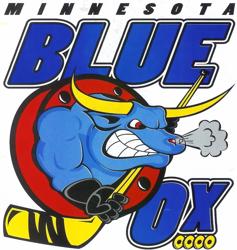 June 6, 1994:  The Minnesota Arctic Blast of the Roller Hockey International league open their inaugural season against the Atlanta Fire Ants and crushed the Fire Ants 23-3.

August 9, 1994: Minnesota was part of the league's record for most goals scored by both teams in one game (29) when they defeated the Chicago Cheetahs 18-11.

August 13, 1994: Arctic Blast's regular season ends with a 13-10 victory over the New England Stingers and Winning the Central Division Championship and the RHI's best overall record in 1994 at 18-3-1.

August 25, 1994: the Civic Arena A.K.A. "The Igloo" (Home to the NHL's Pittsburg Penguins) roof opened to the Space Odessy theme song while the Pittsburg Phantoms played the Minnesota Arctic Blast. It was the first time the stainless steel dome was opened for a professional hockey game.

October 26, 1995: The Minnesota Arctic Blast sued Roller Hockey International in an attempt to jump from the league -- a move that "could lead to the disintegration" of the league and provide "an opening" for the NHL to sponsor roller hockey teams, according to the Minneaolis Star Tribune.  Paul McEnroe reports that Arctic Blast President Peter Jocketty says he has "had conversations" with NHL officials "who are showing interest" in roller hockey. Jockety:  "The NHL wants a situation where each NHL owner would have the right of first refusal when it comes to operating a roller team in a particular city."  The Arctic Blast will present its case in front of U.S. District Judge David Doty, claiming that (RHI) "fraudulently charged varying franchise fees that discriminated between teams," while violating state franchise laws by failing to "file or register a public offering statement."  Jockety blames team losses of $500,000 in 1994 on poor league operations. 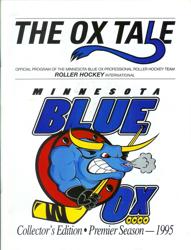 June 3, 1995: The Minnesota Blue Ox opened their Inaugural Season on the road in Montreal with a 9-7 victory.  Forward Chris Tucker had 2 goals, and 4 assists on the victory.  The Ox scored two shorthanded goals in the game. Goaltender Bill Pye made 43 saves (.860 save percentage).

May 24, 1996: BLAST from the past; Minnesota's original roller-hockey team disbanded in 1994, but after a renewed commitment from the league, it is back!  The Minnesota Arctic Blast is back, and this time the team plans on sticking around. The Blast joined Roller Hockey International (RHI) in 1994 but dropped out after the season, concerned about a lack of commitment from the league's management and owners. But after an unsuccessful attempt to form a competing league, team president Peter Jocketty is convinced the league has changed and the sport is ready to flourish in Minnesota and across the country. "It's going to be a solid entity," Jocketty said. "Look at the growth of roller hockey. Someone's going to thrive in this. It's just a matter of who hangs in there." After the Announcement of the Roller Hockey International Minnesota Arctic Blast Roller Hockey franchise in 1994, the team held a try out in early April at Aldrich Arena in Maplewood, Minnesota with over 40 hockey players trying out.

June 14, 1996: Justing McHugh was honored by Blast. Former Gophers hockey player Justin McHugh was honored at the Target Center by the Arctic Blast as part of Community Night. McHugh, 22, is a forward on the roller hockey team and will be asked to skate around the rink with the crowd before the game against the New Jersey Rockin' Rollers. The Minnetonka native's parents will drop the opening puck. While with the Gophers, McHugh was a co-captain during the 1994-95 season. He recorded 126 total points on 66 goals and 60 assists and played in 160 games between 1991 and 1995.

August 18, 1996: Laylin gives Blast top seed in playoffs. Former Gophers hockey player Cory Laylin scored the game-winning goal in a sudden death shootout Monday night to give the Minnesota Arctic Blast a 7-6 win over Empire State.The victory assured the Blast (21-6) the top seed in the Eastern Conference going into the first round of the Roller Hockey International league playoffs, which start Sunday. The first round consists of a best-of-three series, and the Blast will play the second-place team from the Central Division -- either St. Louis or Montreal. Minnesota will end its regular season Thursday at Ottawa and will play its first home playoff game Aug. 20. 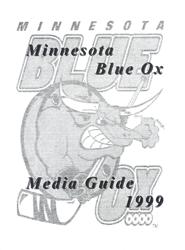 May 25, 1999: Minnesota Blue Ox of Roller Hockey International (RHI) held open tryouts on Tuesday May 25th from 11am to 2pm at Aldrich Arena in Maplewood, Minnesota. Prospective players, ages 18 and older had to provide their own equipment and a $25 registration fee was due on the day of tryouts. The Blue Ox played 26 regular season games that summer of 1999, including 13 home games at Mariucci Arena in Minneapolis, Minnesota.

June 13, 1999: The Blue Ox opened their home schedule against the Chicago Bluesmen on June 13th at 7pm.