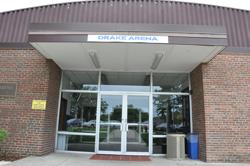 Drake Ice Arena is located at 1712 Randolph Ave near the Highland Area of St. Paul and is on the St. Paul Academy/Summit School grounds.  Erected in 1967 for the history rich St. Paul Academy Boys hockey team that dates back to 1905 when St. Paul Academy was a militiary school.  Drake Arena is named after Physician Carl Bigelow Drake 1886-1965.  Carl was a MN native and a 1908 graduate of Yale University, and a 1912 graduate of the University of Minnesota Medical School.  As noted, he was a member of the Zeta Psi fraternity and Nu Sigma Nu fraternity.  He married Louise Hadley (1892-1987).  Drake donated funds to aid physicians and surgeons in Belgium in 1915 & was a World War I veteran himself in 1919.  He resided at 436 Ashland Avenue. In 1919 MD Drake became the secretary of the Minnesota State Medical Association until 1921when he took up the position as school doctor for Hamline University.  He went onto becoming President of the Ramsey County Medical Society in 1942 and was an active member of the Minnesota Boat Club.