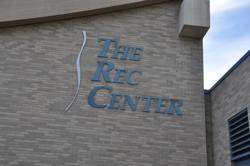 St. Louis Park REC Center is a classic venue that was initially erected with one ice sheet in 1970.  Located at 3700 Monterey Drive in St. Louis Park, MN. the Rec Center today features an outdoor aquatic park, BMX/Skate-Park, and two indoor ice arenas—used by both St. Louis Park and Benilde St. Margaret’s Boys and Girls High School hockey teams and meeting and banquet facilities.  The 1970 "West Arena" is the main home-ice rink for both teams and has seating for 2,000 spectators.  The arena outwardly has a slanted roof - that plays into the mystique of the interior - in this 1970 classic arena.  Arena two, or the "East Arena" is a bare-boned practice rink that has seating for 350.  Upon completion of the west rink, the main entrance and lobby was additionally changed to this west side that previously was smaller where today's trophy cases are located on the second floor.