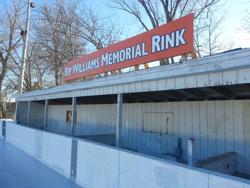 The area of Lower Chester Park has a rich history, having been at one time at the eastern edge of development of the City of Duluth.  Located across 15th Avenue East is the historic, former Northwoods Children’s Home, which was built in 1903.  Along with children living at the orphanage, and children in the up and coming “melting pot neighborhood” Chester Creek neighborhood, it became evident that a play area was needed.  It was in 1915 when the area was established as a park.  In the intervening time the site has held a Band Shell, a Roller Rink, and of course, many decades of active organized hockey.  Lower Chester Park is now leased from the City of Duluth, and operated by the non-profit organization, Neighbors of Lower Chester Park (NOLCP).  NOLCP’s mission is to provide a facility and recreational area for year-round to members of the Duluth community. Summer activities that may take place include: use of the rink for roller-blading, skate-boarding, dances, parades, and games.  The flat green area is available for community gardening, lawn games, potential playground and more!  Winter programming includes hockey, recreational skating, and bon-fire parties at night.  The building is also available for educational and entertainment purposes.

Lower Chester Park houses the only outdoor, boarded USA Hockey-sized cement rink the in the city of Duluth.  The rink is packed full of skaters on a crisp, cool day as the sound of skate blades echo throughout the neighborhood of Lower Chester Park. The history behind the rink lies within the name.

Above the benches at the hockey rink, located on Fifteenth Avenue East, a sign reads “Rip Williams Memorial Rink.” Opening in 1915, the rink was later dedicated to hockey player and coach RIP Williams in 1989.  RIP, born and raised in Duluth, was the father of seven children, including the first American brothers to play in the National Hockey League (NHL), Tommy and Butch Williams.  The Williams family grew up in a house located next to the ice rink.  Rip started skating at the rink when he was only six years old. Growing up in a time where hockey had few organized teams, Rip progressed through the ranks and made it all the way to one level below the NHL.  After retiring as a player, Rip devoted a large amount of his time to coaching kids at the rink, including his own children.  “They say it takes about 10,000 hours to become really good at something, and I spent every one of those 10,000 hours over there,” Butch said.

Three sheets of ice make up the complex: a pleasure rink for free skating, a smaller, boarded rink for young children, and a larger, boarded rink for open hockey.  There is also a warming house on-site where people can rent skates and helmets, buy snacks and warm up from the cold.  That luxury wasn’t available during Butch’s childhood.  “We just had a couple of wooden shacks over there with pot belly stoves in them that we would shovel coal into, and that’s what would provide the heat,” Butch said. 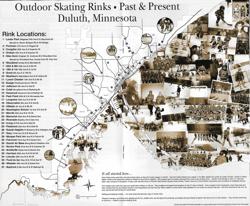 The Lower Chester Park community eventually decided to build a facility that would take the place of the wooden shacks. The kids who played at the rink even got involved by hauling blocks of concrete.  Money was raised through scrap drives, outdoor dances and auctions.  Now, the park belongs to the city, but the facilities have been leased to Friends of the Park, a community organization committed to supporting local parks. Many other community rinks are scattered throughout the city.  Thomas Wheeler, who grew up in Congdon Park, began his hockey career at the Congdon rink when he was just four years old. He eventually played for Duluth East High School, Hamilton College in New York, and professionally in Europe for four years. Wheeler still remembers the days when he played at the city’s outdoor rinks as a child.  “I took my skates and stick to school every day,” Wheeler said. “You go to school and at three o’clock, the bell rang, and over to the rink you go.”  Wheeler said almost every neighborhood had its own rink where the area children would gather to play hockey.  There were rinks in Lower Chester, Portland, Congdon, Woodland, Glen Avon, Duluth Heights, Park Point and several other neighborhoods.  Wheeler recalled that no games were organized by teams or coaches and that there was usually no game plan.  “You just go down to the rink, and somebody would throw a puck out there, and you’d figure out how the game went,” Wheeler said.

Lower Chester Park has produced many great hockey players, as many young children grew up playing on the rink. Stan Gilbertson, Ben Wolfe, and Tommy and Butch Williams all grew up in Lower Chester and eventually played in the NHL at one point in their lives.  Even Duluth East High School’s hockey coach, Mike Randolph, grew up and played hockey at Lower Chester.

In late August 2010, Mabel Galvin (Granma #1) was innocently walking her dog through the park.  A life-long resident of the neighborhood she became aware that the outdoor skating facility would soon become extinct.  Many residence knew city funding had dried up and the ice melted away as the program left a $30,000 deficit with the City of Duluth in 2007.  But no one knew the city had offered a group a 3-year lease on the park so a greenhouse could be constructed on the cement slab where the hockey rink stands.  Mrs. Galvin in complete shock knew right then and there that something needed to be done and the neighborhood must come together. After all, the park and its facilities was established back in 1915 as this historic district became a "melting pot neighborhood".  She immediately told her next door neighbor of 45 years, Marge (Williams) Shoots (Granma #2) and other long-time community residents Bev Bernstson (Granma #3) and Diana Storms (Granma #4).  Marge was one of the first girl hockey players back in the day and her two brothers, Tommy and Butch (Warren) Williams.

The four founding grandmothers did not waste much time as they organized a pot-luck-picnic party on September 25, 2010 selling home-grown vegetables and deposited $117 into their fund that was unnamed at the time. Then neighborhood meetings were scheduled every two weeks of the month at a local Methodist church.  Next came rummage sales, then spaghetti fundraising dinners, and locals donating money to make the place once a safe place to play and recreate a reality again.  Eventually the group formed as a nonprofit 501(c)(3) organization called the NOLCP, Neighbors of Lower Chester Park.  In doing so, this enabled the formation to obtain the lease on the property and also insurance.

The biggest obstacle the grandmothers ran into was obtaining affordable insurance.  After several attempts in 2011 in locating an insurance company a roadblock was hit.  Yet like all prayers, there is an answer and it wasn't a coincidence that the gentleman who was able to locate an inexpensive insurance policy was involved in hockey.  Skeeter Moore, a Duluth native and Executive Director at Northshore Inline help facilitate these actions for the Neighbors of Lower Chester Park.  The lease-hold was approved by the city on September 15th as well as the insurance now being intact. "We all mourned the loss of the sight of children in helmets, with sticks and skates, and the sounds of cheering parents and pucks smacking the boards ever since the the economy downturn had forced the City of Duluth opt out of funding for various activities at the parks", added Bev Berntson, a.k.a. Granma #3.

Deb Filipovich, Co-Chair and founding member quipped, "The Lower Chester rink and recreational site is the only flat public play space in our neighborhood.  It is important that it remains open for the community and the neighborhood kids of all ages to have the same opportunity my sons had." All the hard work and volunteering finally payed off.  A grand re-opening was held on December 10th.  The four grammas and other members organized a celebration with music, entertainment, concessions, attendance by the mayor of Duluth, and of course skating.

The gathering also had a formal dedication on the reproduction of the sign that stood atop the penalty boxes for so many years.  The 'Rip Williams Memorial Rink' will again be hung and sounds and sights kids playing hockey will again be actuality.  Rip was the father to Marge (alias Granma #2), Tommy, and Butch.  "It's important for children to have a safe place to play and recreate", stated Granma #1 of East 5th Street, Mabel Galvin.  The true original founder of NOLCP also added, "I'm very proud of what has been accomplished by everyone.  However it all goes back to my little dog, "Sassy". Had I not been walking her I'd have never known what was looming for the hockey rink."

For decades, kids and adults of all ages have been skating at Rip Williams Memorial Rink. It is a piece of history in the neighborhood of Lower Chester Park that continues to grow with each pair of skates that touch the ice.  “He spent so many years devoting his life to working with kids,” Butch said. “He literally coached thousands of kids at this rink, and he was never in it for himself.”