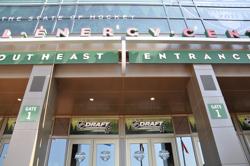 Built to showcase the game of hockey, a “State of Hockey” tribute pays homage to the state’s official sport with exhibits throughout Xcel Energy Center. One of the first things visitors notice is the ring of hockey jerseys representing every boys and girls high school hockey team in Minnesota.  Four separate concourses on four seating levels, plus the Al Shaver Press Box on the fifth level, provide configuration capabilities to seat more than 20,000 guests.  Xcel Energy Center's wide-open concourses - measuring as much as 70 feet in width - offer guests an open view of every event. Each of the four levels was strategically designed to create great sightlines and superior acoustics.  There are 74 executive suites; 12 on the main concourse and 62 on the Executive Suite Level. The RBC Wealth Management Club Level features leather seats, an exclusive merchandise store, and upscale food and beverage options anchored by Headwaters Bar & Restaurant. In 2012, the Bud Light Top Shelf Lounge was added– an all-inclusive loge area on the west end of the RBC Wealth Management Club Level.  The lounge has a Scandinavian influence and includes 24 loge boxes, a canoe-inspired bar, sustainable lighting, an exclusive club area, a complimentary buffet, a private bar and iPad access. One of the most eye-catching elements inside Xcel Energy Center is the electronic display system that includes a 360-degree video ribbon board and an eight-sided, 50,000-pound scoreboard.  Xcel Energy Center was the first NHL venue to offer AT&T Wi-Fi.  Inside the venue, there are 274 Wi-Fi access points covering seats, concession stands and concourse areas.  Fans can easily connect to the AT&T Wi-Fi network, and visitors with an AT&T smartphone or device can automatically connect without any log in required. 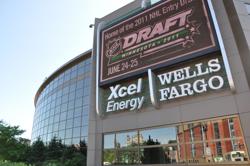 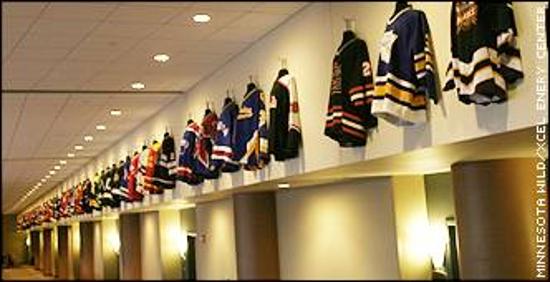