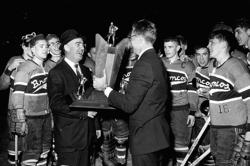 1947:  The tournament is on radio for the first time, as Roseau’s games are broadcast back to northwestern Minnesota.

1947:  St. Paul Johnson becomes the first school from the southern part of Minnesota to win the tournament, defeating Roseau 2-1 for the title.

1951:  Eveleth wins a record setting fourth straight championship with a 4-1 win over St. Paul Johnson in the deciding game. 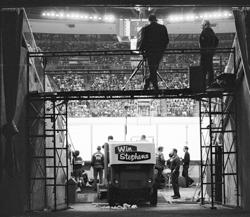 1956:  The first televised games of the tournament began.  A Twin Cities television channel (KEYD, Channel 9) broadcast the two evening games on Thursday.  They also did the Saturday championship game.  The process of televising games was discontinued until 1961 when the championship and third place games were broadcast by Channel 11 (WTCN) from the Twin Cities.

1969:  The tournament is moved from the St. Paul Auditorium and is played for the first time at the Metropolitan Sports Center in Bloomington, MN.

1970:  As a result of expansion of the regular season for many teams, the time of the tournament is moved from February to March.

1975:  Private schools are allowed into Minnesota State High School League play for the first time, and into the tournament. Prior to that, they played in the State Catholic Tournament (1949-1969) and the State Independent Tournament (1970-1974).

1976:  The tournament is moved back to St. Paul, this time to the St. Paul Civic Center.

2001:  Tournament moved to the Xcel Energy Center in St. Paul, home of the NHL’s Minnesota Wild.