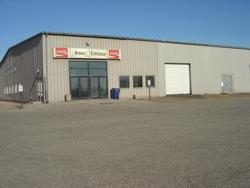 The Fergus Falls Ice arena located in the Otter Tail County Fairgrounds at 1812 Pebble Lake Road off of Highway 82 in Fergus Falls MN.  Built back in 1975 the arena houses 2 sheets of ice.  The main arena has seating for over 1300 spectators to cheer on the Fergus Falls Otters high school and youth programs.  Attached in the rear of the main rink is a VFW sponsored Satellite Arena that has a smaller sheet of ice at 191' x 79' I was told upon my visit to the arena that "The Satellite Arena used to just be an outside rink with natural ice then they built a structure over this natural ice rink, converted it to artificial ice , and use it mainly for practice, and youth games."  The Satellite rink doesn't offer much room for viewing but is a great facility within the confines of the Fergus Falls Arena.  Fergus Falls is currently proposing a new ice arena prompted by anticipated cost increases for maintaining both ice sheets located on the fairgrounds.

"An examination of the building structure and interior, mechanical and electrical systems and code compliance determined it would take about $3 million to extend the life of the arena and provide system upgrades.  With those cost figures in mind, the Fergus Falls Hockey Association requested the city and school board consider the option of constructing a new community ice arena connected to the future middle school building expansion"