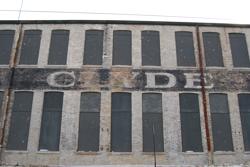 The Duluth Heritage (Essentia Health) Center is located at 120 South 30th Avenue West Duluth, MN and is now the cornerstone of the Heritage Village Development at the Clyde Iron property.  With great accessibility from I-35 and all of Duluth’s neighborhoods.

One might not consider the 2008 renovation/built Heritage Sports Center a Minnesota"Hallowed Ice Arena" as of yet- but considering the history of the building, and the great tradition of the teams whom call the newly erected "building home" it is worthy of being calling a Minnesota "Hallowed Building with Rink".  Few people outside Duluth remember a long gone company called Clyde Iron Works.  But their hoists and cranes put the muscle into America’s logging industry and helped build national monuments.  The company’s empty old buildings stood just off I-35.  You can sense the spirits of long-gone workers in this building - one of almost a dozen brick structures, imposing, and cavernous, spread over about 10 acres, with anoriginal hoist system remaining in place near the entrance of the arena- namely called "Heritage Hall".  To Alessandro Giuliani, these buildings aren’t cold and hollow - they’re history - a link to a long ago Duluth of blue collars, hot smelters, and cold iron.  The old factory is the size of a sports field.

Clyde Iron’s fame begins in the early 1900’s with the McGiffert Log Loader - a railroad-mounted steam-fired log loading beast built in Duluth.  The McGiffert helped clear forests from Maine to Washington. “That’s what started them,” Giuliani says.  “Over the years they evolved into making a lot of the equipment that was used in building the Empire State Building, the subway system out in New York, the Panama Canal.”  Clyde Iron specialized in heavy-duty hoists, derricks and cranes.  Their harbor whirly cranes were found in ports around the world.  The original building, back to 1898 is the oldest.  It’s the only one made entirely of wood.  Soon, it will be a modern market.  It will be completely restored; with fresh produce, baked goods and meats for sale alongside Italian and Mexican eateries.  A sturdy brick building across a gravel parking lot is the future craft brewery.  Forty years ago they bottled Karlsbrau beer there.  The office building on the corner will become a hotel.  All together, Giuliani plans a major renovation that’s going to cost more than $30 million.  But he’ll save most of the buildings, and the proud story of the Clyde Iron Works.

The Duluth Heritage Sports Center is a replacement for Peterson Arena, a city rink built in about 1972 which was destroyed by fire in December 2004.  It will be owned and operated by a non-profit organization.  Promoters say "it’s about more than hockey - it’s about one of Duluth’s needier neighborhoods".  A grass-roots effort, fueled by volunteers, led to the Heritage Sports Center at 29th Avenue West and Michigan Street.  “Private donations payed for most of the $16 million price tag for the sports center, although the Duluth school district, the city, and the state have also committed money.  Alessandro Giuliani’s retail development is privately financed, beyond some tax breaks.  Giuliani says he hopes to make money on the venture, but he really wants to make a difference.  “It’s going to start a lot of good things for out here,” says Giuliani.  “I can’t wait.”

The two new buildings shown in the photos jutting from Clyde’s old assembly building, are for public hockey, indoor soccer and softball.  The unique, old-style look of the complex is highlighted by it's brick interior, cleaned up from the Clyde Iron industrial site (which is depicted in this photo by the High School locker rooms where the old bricks, meet the new construction).  Patrons climb the stairs from Heritage Hallto the Heritage Arena concourse, which provides a view of the bowl seating area.  The setup is remindful of Mariucci Arena in Minneapolis and the proposed DECC expansion with fans walking down into seats and, at the Heritage Arena, getting as close to the ice surface as is possible.  The rink seats 1,400 spectators.  Three of Duluth's most notable hockey families -- Peterson, Fryberger and Williams are the central art on the rink's main wall.

Extensive artwork and photos detailing the city's hockey history are planned, although only one piece is in place, a mural at the top of the main staircase.  Artist Tim Cortes, a former Duluth East goalie, depicts a youngster dropping a puck for a faceoff between two buddies.  Already in place within the arena is the ongoing "Collegiate Wall" which the Center has established within the Heritage arena, and will post information about Duluth’s hockey rink-to-college players.  The Heritage Rink has also highlighted the following notable Duluth-bred individuals in large "ceiling mounted" banners that are a nice touch to the Heritage Rinks interior decor including:  Tommy Williams, Butch Williams, Dates Fryberger, Dave Heaslip, Dave Spehar, Jim Claypool, Jim Watt, Mike Randolph, Phil Hoene, Phil Verchota, Robb Stauber, Roger Gilbertson, Sean Hill and Shawna Davidson.

Duluth's three high school boys teams and one girls team will play nearly all varsity games at the Heritage Arena in 2008-09.  Each team has a 36-player locker room in Heritage Hall.  The second phase of construction, the Heritage Pavilion is a connecting rink with seating for about 1,100 which is the main rink for the High School JV teams, and youth hockey programs within Duluth.  From October to March, the connecting multisport Heritage Pavilion will serve as an additional ice facility, with a multisport turf playing surface that will be in use from April to September.  The Boys and Girls Club - whose Duluth offices are located within the Duluth Heritage Sports Centers mezzanine area- and youth football programs will be the primary benefactors of the indoor playing field, but it will also be used for other recreational activities from tennis to soccer and baseball.

In June, 2016 the Duluth Heritage Sports Center entered into a facility naming rights agreement with Essentia Health, one of our nation's leading health care providers. 'Essentia chose the venue as being the "right place" to promote their philosophy of health, wellness and well-being not only to the Duluth community' but to the entire region as well'.

Unlike traditional arena naming rights where "brand recognition" is the sole purpose, Essentia saw in us a synergistic value-sharing relationship that goes well beyond simply recognizing the brand.  Because of this, "Essentia Health" was added to the rinks title, logo and to all informational material that beared the buildings name. 'We do so with the solemn pride that is ours to be so closely linked philosophically and emotionally with an enterprise that focuses its entire energies on health, wellness and well-being. For us, it's a tremendous fit within the Duluth hockey community'.

Special thanks to Rink Manager Brad Onofreychuk for a VMH.com guided tour through the Heritage Arena.