In the 1920's the USAHA was the strongest league in all of hockey with the exception of the major leagues.  To accommodate the larger crowds attending games at the nearby Curling Club Arena, the large Amphitheater was erected in 1924 at 12th Avenue East and Superior Street in Duluth and opened officially on December 4, 1924.  The Amphitheater was one two such buildings to be built in the state initially with artificial ice including Minneapolis Arena.  The Minneapolis Arena, with a seating capacity of 5,500, and the Duluth Amphitheater, accommodating 4,000 fans, created reliable ice conditions and additional comfort for the fans.  Crowds of 4,000+ were once commonplace at the once mighty Duluth Hornets hockey games where the Amphitheater served as the Hornets home ice.  Some of the Hornets games still continued to be played within the smaller confines of the Duluth Curling Club when ticket sales were lower.  The Amphitheater was also the location where the Duluth State Teachers College (Now UMD Bulldogs) started their history laden program.  In the Pedagogues first game things got off to a rough start when their opponent, Duluth Central High School, beat DSTC by a 3-0 score at the old Duluth Amphitheater, enroute to a win-less 0-3 inaugural season campaign under Coach Frank Kovach in 1930.  The Ped's used the Amphitheater as their home rink from 1930-1932 when the college dropped the sport until re-establishing it for the 1946-1947 season.  Professional hockey left Duluth during the winter if 1933 when the Duluth Hornets franchise moved to Wichita to become the Wichita Blue Jays.  With the exception of the 1933-1934 season when Duluth placed a team in the Central Hockey League, professional hockey in Duluth had ended forever.  On February 12, 1939 during a Fire-Policeman benefit game, in front of approximately 4,000 fans, the roof of the Amphitheater collapsed from the weight of snow.  Fortunately all of the fans escaped serious injury after first being warned of "crackling noises" coming from the roof.  The fall of the Amphitheater roof later led to the buildings demise and was later partially demolished in 1941.  The demise of the Amphitheater placed temporary skids on Duluth Hockey until 1953 when artificial ice was installed in the Curling Club Arena. 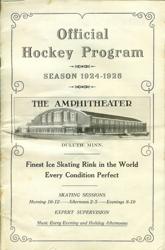 Upon our visit to Duluth for research a conducted informal sit-down interview with older/current Duluth Curling members.  We were told, "following the buildings roof that collapsed the Amphitheaters steel structure was recycled and scrapped for the war efforts during WWII". Reports of the time indicated the roof came crashing down - which was not true,  but that the roof merely caved-in or buckled-in following the crackling sounds that were heard by spectators within the arena.  Approximately 10 years following partial demolition of the Amp, the Plaza Shopping Center was constructed on the same site utilizing some of the brick and stone that watched the rise of Duluth hockey, and the fall of the Amphitheater.  J.C. Penny store was a long-time tenant of the mall location.  The only remnants remaining of the old building are the far eastern/south side walls of the Plaza shopping center (located at 13th Ave. E & Superior Street), which in the lower part under the grocery store houses a tele-services company, and in the upper-part a Super One grocery store, who acquired the mall location in August of 2006, of which is one of the existing exterior walls of the Amphitheater structure.  When visiting the grocery store in Duluth, their is a very nice memorial within the entryway of the store in memory of the history and Amp building on the same site named as: The Vintage History of the Plaza.

Across the street from the current Plaza Mall is the aging 1915 built Duluth Armory whose aging bricks and cracked windows still stand as a testament to the old neighborhood which once was that included this 1924 built Amphitheater.

Special thanks to current Duluth Curling Club members for information on the old Duluth Amphitheater.