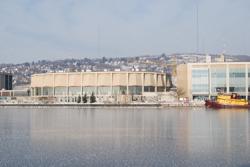 The venerable and historic Duluth Entertainment Convention Center (DECC), originally called the Duluth Arena Auditorium, is arguably one of the top college hockey complexes in the country, and has proudly served as the home venue for the University of Minnesota Duluth Bulldogs hockey team from August 5, 1966 - December 30, 2010 when the new "DECC Arena Expansion opened named Amsoil Arena.

Located on the waterfront near Duluth's famous Aerial Lift Bridge and Canal Park, the DECC is a picturesque arena and has become a landmark in its relatively short history.  Initially erected at a cost of $6.5 million, the Arena portion of the complex houses a smaller than normal 190-by-85 foot hockey rink with 5,301 cushioned theater seats, and six locker rooms, including the recently-remodeled $2 million locker room facility now used by the Men and Women Bulldog hockey teams.

The rink can be converted to allow the DECC Arena to host concerts, dinners, conventions,and shows.  The DECC was the site of the NCAA I Men's Hockey Championships in both 1968 and 1981, hosted the 2003 and 2008 Women's NCAA Division I Frozen Four.  A spacious lobby, where ticket sales originate, separates the Arena from the Auditorium.  The Auditorium Seats 2,400 and plays host to concerts, symphonies, plays, operas, high school and college graduations, and a variety of other activities.  Paulucci Hall, located beneath the DECC lobby, is the center for many post-game activities and other social functions.

Pioneer Hall was added in 1976, and contains a hockey rink with smaller seating capability utilizing fold-out bleacher seating.  Pioneer Hall is also the home of the Duluth Curling Club with eight curling rinks (can be expanded to provide up to 13 curling sheets for major events) and a lounge area.  It is the largest curling venue in the United States, and has hosted two World Championships, the US Olympic Trials, and numerous National events.

In the mid 1990's a $30 million Convention center was added, which is the site of numerous social, business and entertainment events, and features the 26,000 sq ft. Lake Superior Ballroom, the 12,000 sq ft. Harborside Ballroom, and 25 Meeting Rooms, an OMNIMAX Theatre opened in the spring of 1996 and a 10-screen Movie theater complex was added in 2005.  An adjacent parking lot and ramp allows for plenty of close parking, and a indoor skywalk system- the Northwest Passage- links the DECC to Duluth's downtown district.

In 2008 Governor Tim Pawlenty passed a budget bill, as initially introduced in the state's 85th Legislative Session for 2007-2008, that Pawlenty decided to use his line-item veto authority rather than taking down an entire $925 million bonding bill.  Pawlenty let $717 million worth of projects stand, including funding for four ice arena construction projects and facility repairs are included in the bonding bill that Governor Pawlenty signed on April 9 in Brown Hall auditorium at the SCSU campus.  The four beneficiaries of this  bill include: Renovation and improvement of the National Hockey Center in St. Cloud, Crookston to receive new home ice rink(s), a new modern sized D1 rink to be constructed for Bemidji State University, and $38 Million for the "DECC expansion project".  The DECC expansion includes a new hockey arena for the UMD men’s and women’s teams, which will increase seating capacity by 2,100 and is expected to boost spectator comfort and improve the college’s ability to recruit top athletes.  It also includes a parking ramp and will provide more space for conventions and concerts, which DECC director Dan Russell said will bring more events to the complex.  Construction started in September (2008) and was finished in time for the 2010-2011 hockey season when Amsoil Arena opened to the UMD Bulldogs vs. University of North Dakota on December 30, 2010.  Governor Tim Pawlenty had been given the nickname -in Minnesota hockey circles- as the "Rinks Governor" for his efforts to these communities that will surpass his tenure as Governor in Minnesota.