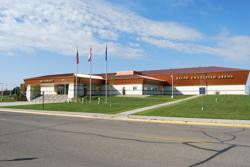 Ralph Engelstad Arena (REA) or better known as "The Mini Ralph" is a palatial ice arena located in Thief River Falls, Minnesota which is used primarily for hockey.  The REA is the home ice rink to the Thief River Falls boys and girls high school hockey teams.

On February 4, 2002, a formal announcement was made by Architect Jim Kobetsky from Schoen Associates in Grand Forks, North Dakota, that Ralph and Betty Engelstad from Las Vegas, Nevada were donating $10 million towards the construction of a multi-purpose facility with a focus on hockey.  The City Council accepted the Engelstad’s gift at their February 12, 2002 Council meeting.  As the scope of the project grew so did the need for additional funds.  A local fundraising campaign began in September of 2002 and raised approximately $3 million through cash and in-kind donations to complete the project. The arena was dedicated on November 29, 2003.  In June of 2005, construction of the community room was completed and proudly bears the name "Imperial Room”.  It hosts receptions, trade shows, reunions, parties and other events.  A basketball floor and arena decking were purchased in 2005 to enable the facility to host basketball games, wrestling matches, and other events.  Following completion of the project, the Engelstad family donated over $13 million dollars.  The facility features 2,800 theatre-style folding seats complimented by 281 bar stools along the perimeter of the bowl with a potential (collapsible) seating capacity of 4,500 total. The REA also boasts two concession areas, eight locker rooms, hospitality room, weight room, Frappier Acceleration skating treadmill, training/first aid rooms, lobby with hall of fame area, four offices and ticket windows, press box with meeting space, and a 5,000 square foot community room. Gross square footage of the facility is 1,050,000.

Ralph Engelstad was born on January 28, 1930 in Thief River Falls to Christian and Madeline Engelstad.  He attended Northrop and St. Bernard’s Elementary Schools.  Ralph’s life in Thief River Falls continued to revolve around his two main interests: work and hockey.  He was an outstanding freshman goalie on the TRF team, which played in the first sanctioned State High School Hockey Tournament in 1945.  Ralph graduated from Thief River Falls Lincoln High School in 1948.  He went on to play goalie for the University of North Dakota graduating in 1954- the University of North Dakota also received a large contribution in the tune of $100 Million+ to build the main Ralph Engelstad Arena in Grand Forks, ND.

Ralph married Betty Stocker of East Grand Forks in 1954, and their only child- daughter Kris- was born in 1958.  After a half a dozen years as a contractor in Grand Forks, and attaining the millionaire status he aspired to reach, Ralph sold virtually all of his property and other holdings and moved to Las Vegas, Nevada in 1959.  Ralph became a very successful businessman in Las Vegas after building and selling hundreds of homes in housing developments.  In 1971 Ralph purchased and remodeled the bankrupt Flamingo Capri Motel, was granted his Nevada Gaming License and a short time later began building the Imperial Palace Hotel and Casino on the Flamingo Capri property.   The Imperial Palace is ranked as the second largest sole proprietorship in the world with 2,700 rooms and 2,600 employees.

Ralph Engelstad sadly passed away on November 26, 2002 from a long battle with lung cancer.  With Ralph Engelstad’s death at the age of 72, Thief River Falls lost its most well known native son as well as a major benefactor, but he left a legacy of loyalty and caring that exceeded his personal generosity.  The traits Ralph treasured most among his friends and associates were loyalty, and he was fiercely loyal to his hometown and to the game of hockey that he loved.  Throughout his memorable career, Ralph had two mottos for living that reflected his ambition and drive:  “The harder I work, the luckier I get”, and “No dream comes true until you wake up and go to work”.  His hometown can only say most sincerely the words, "Thanks, Ralph!"