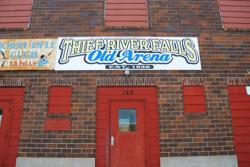 The Thief River Falls "Old Arena" is located at the corner of 2nd St. & Knight Ave. N in the downtown area of Thief River Falls, MN.  In the 1930's the Works Progress Administration (WPA) in Minnesota built 19,000 miles of roads, 447 bridges, 82 horseshoe courts, and 1,000 public buildings- one of which was this 1936 constructed (WPA) arena opening initially with natural ice.  The arena today is aptly called the "Old Arena" and is the home ice rink for the Thief River Falls Amateur Hockey Association (TRFAHA).  The "Old Arena" is a vintage venue with 1/2 boards on one end of the rink, one bench door, & posts right on the sides where fans could lean right over the glass.  The arena served as the main and only hockey arena in TRF for over 35 years until the new Huck Olson Memorial Civic Center was built in 1971 adjacent to today's palatial Ralph Engelstad Arena (REA).  Following the construction of the $13 million REA facility, the TRFAHA took over operation of the Old Arena through a lease program with the City of Thief River Falls.  "This venture created an extremely positive impact on our program," said TRFAHA president Tony Dorn.  "We used the facility for the majority of Mite, Squirt and in-house practices and games.  When necessary, some of the older groups also practiced there."   "This facility is perfect for these age groups.  It is an important asset to TRFAHA; probably as important as having the finest facility in the country here in Thief River Falls in the REA."  TRFAHA expenses include payment to the city for ice time, USA Hockey/Minnesota Hockey registration fees/insurance, equipment, awards, game officials, tournament costs, operation of the Old Arena and travel expenses for coaches, who otherwise volunteer their time.