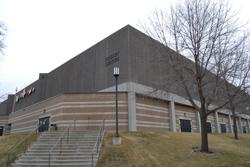 In late May of 1987 St. Cloud State Universities (SCSU) plans to build the National Hockey Center (NHC) were finally approved through the State's Legislature by Governor Rudy Perpich, with important on-campus help from President Brendan J. McDonald.  McDonald was the Universities President from 1989-1992 and was a strong advocate for the school's move to Division I hockey, and helped gain the funding for the National Hockey Center.  Brendan had a strong connection to the hockey program having been a former Husky player, later Coach himself, and a student from 1950-1954 at SCSU.  Groundbreaking for the arena occurred in the fall on September 23, 1988 - with the first game played on December 16, 1989 against Northern Michigan to 4,000+ Husky faithful. The NHC is located on the south end of the SCSU campus at 1204 4th Ave. S. and Herb Brooks Way in St. Cloud Minnesota with 2 Olympic-size rinks at 200ft. x 100ft. Overall the facility measures 138,000 square feet. The Hockey Center is the home ice to the D1 St. Cloud State University Husky men's and women's hockey teams, and the St. Johns University Johnnies hockey team.

The main rink #1 was later re-named for former SCSU President Brendan J. McDonald, (who advocated the team's move to Division I hockey in 1987-1988) with the help of the late -then coach- Herb Brooks leading the way for the Husky faithful. Rink 1 boasts seating for 5,763 screaming "dog pound" SCSU fans, while rink 2 has nominal seating for only a few hundred spectators. The lower level of Rink-1 features seatbacks, while additional seatbacks were added in some of the upper level seating areas in 2000 and 2006. The remainder of the upper level seating is bench style.

The main arena has several VIP suites on the east end of the rink. Two new scoreboards with video replay monitors were added in 2004. The wide concourse of the main arena features full concession stands, bathroom facilities, ticket office (with Ticketmaster) and in-game television monitors located throughout the arena. On game night, a souvenir stand includes a full line of SCSU merchandise.

Fans can also check out team photos from SCSU's Division I era, along with a display of jerseys from SCSU's alumni playing in the NHL around the main concourse. Media providing coverage for NHC events are able to work in a spacious press box along the upper level of the building's north side. The press box was remodeled in 2000, and it offers in-game statistic monitors and ample seating for print, broadcast and television media.  Press work rooms and interview areas are located on the lower level of the NHC.

The Huskies' locker rooms are just steps from the main arena. These areas provided players with an outstanding location to prepare for games and practice. The main area of the locker rooms features spacious wood lockers for each player, and the areas are connected to the players' lounges, training room and equipment room. The players' lounges provide a comfortable retreat for the SCSU players before and after practices and games. The lounges feature a wide screen television, plush seating arrangements and several computer work stations for the SCSU student-athletes.

The NHC is also used for concerts, graduation ceremonies and other campus functions. The facility has been a long-time host for the USA Hockey Select 15 and 17 Festivals, and many Minnesota State High School League playoff games.

Major renovation plans to "modernize" the Hockey Center have long been looming over St. Cloud and finally in 2008 Governor Pawlenty passed a budget bill (as initially introduced in the state's 85th Legislative Session for 2007-2008 stating): "St. Cloud State University; National Hockey Center Appropriation. $11,000,000 is appropriated from the bond proceeds fund to the Board of Trustees of the Minnesota State Colleges and Universities to predesign, design, construct, furnish, and equip the renovation of the National Hockey Center." Following the legislative session on Wednesday, April 9, 2008 Governor Tim Pawlenty visited SCSU and signed the bonding bill within Brown Hall. St. Cloud State University will receive $15 million to remodel Brown Hall, $900,000 to plan an integrated science/engineering lab, with $6.5 million going to improve the National Hockey Center.

Funding for four construction projects and facility repairs are included in the bonding bill Gov. Tim Pawlenty signed April 9 in Brown Hall auditorium, including plans for Crookston, Bemidji, and Duluth MN to receive new home ice rinks. Pawlenty has already been given the nickname -in Minnesota hockey circles- as the "Rinks Governor" Source in part: www.stcloudstate.edu