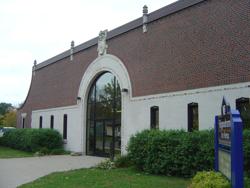 The Hippodrome Ice Arena was built in 1926 with natural ice and at the time of opening the arena was formerly part of the Ramsey County Fair complex. The "Hipp" arena is the oldest ice arena within the Twin Cities metro area that is still in operation today - (The State of MN oldest operating arena is the Eveleth Hippodrome).  The building has been a popular rink for amateur teams over the past 88+ years, and continues to be used today. Through the efforts of Independent school district 624, the White Bear Lake Hockey Association, and endless volunteer hours, major renovations were made to the arena. In 1991 artificial ice was incorporated into the small Hippodrome with a small sheet of ice measuring at 180' x 66'. In 1994 the Hippodrome added a Zamboni garage adjacent to the building, and in 2000 interior renovations were added to the old 88+ year old building, offering a more modern facility that proudly represents White Bear home teams. Upon our visit to the Hippodrome a gentleman asked me "what are the photos for?", I told him about the website and about my relentless search for old hockey history in Minnesota. This gentleman told me, "he and his buddies after High School used to flood the rink with hoses late at night to ensure good ice for the next days skaters". Today the White Bear Hockey Association passes some of this buildings "heritage" onto the younger mite and peewee level kids since they "don't Zamboni the ice after every skating session, rather the kids all grab shovels and they shovel the snow off of the surface to ready the ice for the next group of kids." This is something I was told "Instills some of the heritage of the old building."  Noteworthy: A portion of the movie Ice Castles was filmed in the arena.

"The Hippodrome is a tribute to the founders and the hundreds of volunteers who have followed them that thousands of White Bear Area boys and girls have not only learned the game of hockey but more importantly have a great time doing it".  Dozens of White Bear Lake skaters can be found on college, semi-pro, and pro rosters around the country, including some of the most storied Minnesota hockey players the state has seen such as: Frank "Moose" Goheen, and Brian Bonin- many of which all started at the same place- learning to stand up on skates at the old beloved Hippodrome!"

Source in-part: WBLHockey.com.  Special thanks to Sara at the White Bear Lake Historical Society for the original newspaper clippings on arena.