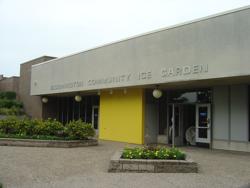 The Bloomington Ice Garden is located at 3600 W 98th Street in Bloomington, Minnesota with groundbreaking of the original rink on May 17, 1969.  The building was later dedicated March 1, 1970 initially with one rink called the 'Bloomington Community Ice Garden', for the cities second ice arena - behind 1967 built Met Center for the Minnesota North Stars.  1970 also happened to be the same year in which nearby Bloomington Jefferson High School opened.  In the Summer and Fall of 2007 new renovations were made to the 37 year old rink namely called "Rink 1". Construction included; new concrete flooring, new energy-efficient refrigeration system, extended players' boxes, and seamless glass to enhance spectator viewing.  Today the Garden, commonly referred to "BIG," has grown to three rinks, aptly named Rink #1, #2, #3.  Rink #2 was added to the facility in 1975, and Rink #3 opened in November 1993, which boasts an Olympic-sized sheet of ice, with a seating capacity of 2,500.  The "BIG" rinks are used for the various Bloomington Boys and Girls youth hockey programs.  It is also the home of the Bloomington Kennedy and Bloomington Jefferson High School hockey teams that have a rich hockey tradition, and history of producing some of the best high school hockey players the state has seen within the "State-of-Hockey".  Jefferson having 5 state championships from 1981, 1989, 1992, 1993, 1994 and Kennedy with 1 in 1987 the various banners hang from the rafters proudly in the Garden arena.  There is also numerous photos of all the former Bloomington teams, and a tribute to the late Bill Masterton whom was a Bloomington native at the time of his death on Met Center ice January 18, 1968.  Following Bills death, the Masterton family, along with Bills friends' established the 'Masterton Trust Fund' that awards scholarships to a graduating Bloomington High School hockey player.  The first Scholarship was awarded in 1969, and it's recipients are known as "William J. Masterton Scholars".  Bloomington hockey has three history laden programs within the community, and the BIG stands a testament to the history revolving Jefferson, Kennedy, and the old Lincoln Bears High School, along with the various D1 and NHL players whom once called the "BIG" home.  Bloomington Ice Garden was one of the arenas used during the 1980 US Olympic teams try-outs, and later practice rinks when the nearby Met Center was not available, also in Bloomington, MN.  BIG was also used in the same facet for the Minnesota North Stars, as a secondary practice arena over the teams existence.  The Twin Cities Vulcans, and Bloomington Jr. Stars USHL squads once called BIG home as well.  In 2017, Bloomington Ice Garden, took 1st runner-up in the 3rd annual Kraft Hockeyville USA competition edged by Rostraver Ice Garden in Belle Vernon, PA announced 4-29-2017.  For finishing as runner-up, Bloomington was awarded $75,000 for arena upgrades by Kraft Foods.