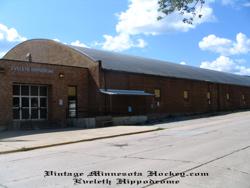 The focal point of the Eveleth hockey community is the beloved old Hippodrome, or better known as the HIPP.  The Original Hippodrome structure at 230'x 150' with seating for 3,000 spectators was built of wood by Mayor Essling in the 1920's at a cost of $50,000 for the powerful Eveleth Reds hockey team, in the United States Amateur Hockey Association.  The first game in the Hippodrome was on January 1, 1922 before a packed house where the Eveleth Reds defeated the Duluth Hornets 10-6.  The structure in the 1920's was referred to as the 'Madison Square Garden of the Northland'.  In 1938 the original HIPP was renovated with brick-replacing all of the wood walls, a new lobby was also added at this time to the southside of the building that is still in place, additionally in 1938 construction led to more seating, new locker rooms installed in the basement, and all of the original steel beams and trusses were renovated the cost for all of the repairs.  The additions in 1938 were $150,000 (5 times the cost of the original building's cost in 1920).  Until 1950 the Hippodrome relied on mother nature to help make good ice since the ice was natural ice.  In 1950 refrigeration, concrete flooring, and artificial ice made it's way into the Hippodrome.  In 2002 four new locker rooms were added, along with 2 new coaches rooms.  The old concrete boards were replaced with more modern era boards that are commonly used in NHL rinks today.  Several scenes from 2005 Warner Bros. motion picture - North Country were filmed within the Hippodrome, fictionally named the Lowen Arena in the film.

The HIPP has provided a home for many great Eveleth hockey players and legends of the game, the arena's fans have witnessed many notable hockey and basketball games and great players.  The proud traditions of Eveleth hockey are forever embodied in the Hippodrome.  Today the Hippodrome is home to the Eveleth-Gilbert Golden Bears/Rock Ridge Eveleth/Virginia hockey team.  Upon visiting the Hockey capital of America in Eveleth and the USHHOF it is highly recommended that every hockey fan should venture down to the corner of Douglas and Jackson streets to witness the old historic Hippodrome, the building itself just smells of old hockey history including historic photos, jerseys, banners, and other Eveleth hockey artifacts that line the walls of the beloved old HIPP.

In 2022, the 100th Anniversary of the States oldest Arena was celebrated with a proper celebration held: 1-15-2022 among a packed house in local Eveleth Auditorium located up the street from local HIPP with numerous members of the community, Eveleth Mayor, former players and USHHoF Alumni present with artifacts on display including; hockey jerseys, images, MSHSL Trophies, including several historical stories of 100 years of hockey history in the community.  Of note, it was compiled that the HIPP was not only celebrating the States oldest ice arena at 100 years old, but is the Nations 4th oldest arena still in use continually for hockey behind that of:

All those passing years transformed everyday realities into legend, a tapestry of names and achievements so rich that the museum honoring American hockey was built in their little Iron Range town.  A half-century before the U.S. Hockey Hall of Fame opened in 1973, Eveleth boys - protected from winter by their chopper mittens and snow boots - shuffled down frozen streets to the Hippodrome, a massive wooden structure erected in 1921 as a home for imported professional hockey players who rode the railroad lines down from Canada.  The boys, or so the legend goes, would sneak into games to watch their heroes, hired by city officials to entertain hard-working miners.  They would supposedly dream of the day they, too, would become stars and give the hockey world a legacy that included names such as Brimsek, Karakas, Mariucci, LoPresti, Mayasich, Gambucci and Pavelich.

The arena - turned from wood to brick during a 1938 remodeling, "heated" for decades by wood stove and modernized in 1985 - still stands downtown.  For 82 years, it has been home to pioneering pro players, great amateur teams and for a time the annual collegiate Hall of Fame game.  The HIPP remains home ice for a high school program that once won 78 consecutive games and four of its six Minnesota state high school tournament championships in succession.  For years, those Eveleth boys indeed did sneak, or skip as they called it then and now into the HIPP to avoid the 10-cent admission fee.  One boy slipped through the basement coal chute or passed through a tunnel dug before the game.  Once inside, he would open a window and usher all his buddies off a ladder "borrowed" from a neighbor.  But it wasn't a tradition necessarily borne from the desire to watch future NHL stars Ching Johnson and Tiny Thompson.  The boys came to retrieve broken sticks - or, better yet, steal unbroken ones from the visitors' bench - they would use for road-hockey games played before they owned their first pair of skates.  "When you think about it, who did pay back when we were kids?" said John Mayasich, who walked from his home 12 blocks away on Summit Street two decades after the amateur Eveleth Rangers replaced the pro Eveleth Reds. "You got a stick for Christmas, and that's all we got all year.  We didn't have money, none of us had money."

Their immigrant parents worked the mines that built Eveleth after an 1891 windstorm tore the land and revealed rich iron-ore deposits underneath.  U.S. Steel bosses positioned a Finn next to a Slovenian, an Italian next to a Swede so they would work rather than talk, a tactic that in time produced a unique brand of gibberish that every Iron Ranger understood.  The miners emerged from underground stained red and orange "looking like something a 10-year-old never should have seen," Aldo Palazzari said after working 10-hour days, seven days a week, for $2 a day.  The miners' children played their first hockey in boots, long before they skated at the Hipp on Saturday mornings.  They played on city streets packed with snow and empty of automobiles before antifreeze was invented.  They dug goals from snowbanks on either side of the street and used a tennis ball, a lump of coal or chunk of ice for a puck.

Twenty boys or more from one block played a game of keep away for hours. The kids who never touched the puck became swimmers or basketball players.  When the Summit Street kids played Hayes Street or Monroe Street, a hard shot would get buried in a snowbank.  So players handled the puck delicately, unaware of the talent they were nuturing.  When Palazzari, born in 1918, first played organized hockey, the puck could only be passed laterally or backward.  "It was a game of skill when we played," said Ben Swarthout, who played 1930's street hockey before advancing to the Eveleth High team and a tryout with the New York Rangers a decade later.  "You passed the puck."  Brothers, neighbors and hometown boys who eventually played collegiately at Illinois or Michigan or professionally in Hershey, Pa., or San Diego passed down their outgrown skates. Kids modified old stove pipes with felt to create shin pads.

The hockey skates Mayasich wore in the years before forging Minnesota's greatest prep career came from an Eveleth boy who returned home from California and offered a pair with so little blade left you couldn't sharpen them.  "You didn't care what size they were as long as you could get your foot in them," Mayasich said.  Eveleth boys passed their skates - and their hockey heritage cthrough the generations.  A young fellow from Minneapolis named Cliff Thompson arrived in town, started coaching the high school team in 1926 and didn't stop until 1958.  His first goalie was Oscar Almquist, who later built a legendary program himself at Roseau. In 1928, Thompson also coached an Eveleth Junior College team that was ranked No. 1 in college hockey, ahead of Yale, Minnesota and Harvard.

Eveleth, and Thompson's coaching, produced a remarkable collection of goaltenders: Frankie (Mr. Zero) Brimsek, Mike Karakas and Sam LoPresti; who became NHL stars in a league almost exclusively Canadian league.  Defenseman John Mariucci became Minnesota's most influential hockey figure, responsible for building the University of Minnesota program with homegrown players.  Thompson's 1945 team, led by linemates Wally Grant, Pat Finnegan and Neil Celley - were so good in winning Minnesota's first state tournament that goalie Ron Drobnick still holds the record for fewest shots faced in a game: only 1.  And Mayasich claims Drobnick dramatically dived from the net to stop a shot headed wide to get that one. "I don't remember," Drobnick said. "Hell, that was 60 years ago.  Johnny wasn't even around then."  Mayasich didn't play in his first state tournament until 1948.  Eveleth won that year, and in 1949, 1950 (the year the HIPP got artificial ice) and 1951, too.  He still holds 10 individual state-tournament records, from all-time points (46) to most goals in one game (seven).

In 1956, four Eveleth boys celebrated an Olympic silver medal in Italy - Mariucci, the U.S. coach, and former high school teammates Mayasich, John Matchefts and Willard Ikola.  In 1980, Eveleth's Mark Pavelich won Olympic gold. Six Eveleth boys born at the end of World War II and into the years of the Great Depression gathered at the HIPP on a recent below-zero morning.  The day before, the United States had won its first world junior championship. "And there wasn't one Eveleth kid on it," said Palazzari, whose son, Doug, now is executive director for USA Hockey.  "Twenty years ago, there would have been five or six Eveleth kids on it.  And now, not one.  Can you imagine?"