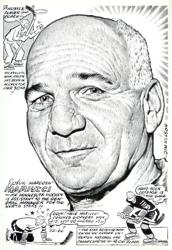 The name John P. Mariucci was and is synonymous with the growth of amateur and professional hockey in Minnesota for over 40 years. Mariucci (May 8, 1916 - March 23, 1987) was an American hockey player, coach, and administrator. Mariucci was born in Eveleth, Minnesota. He attended the University of Minnesota where he played both for the hockey and football teams. In 1940 he was named an all-American on the varsity hockey team while helping the gridiron squad win the NCAA AAU national championship.

After graduation from college Mariucci played for the Chicago BlackHawks for 5 seasons. He was a solid defensive forward and combative team leader who served as captain twice. Mariucci didn't back down from any opponent and waged many fierce battles. In his first 13 NHL games with the Hawks, Mariucci had just under fifty stiches from his forehead to chin. "I'm tired of sewing you up," Chicago trainer Eddie Froelich growled. "Imagine how I feel," Mariucci replied, (per Chicago reports). When his NHL days ended, Mariucci suited up for the St. Louis Flyers of the American Hockey League and the hometown Minneapolis Millers, and St. Paul Saints of the United States Hockey League. During World War II Mariucci served in the United States Coast Guard. He also continued to play hockey as defenseman on the service's team, the Coast Guard Cutters, from 1942 to 1944.

As admirable a player as he was, Mariucci's true calling was as a coach and nurturer of talent. After his professional playing career ended, Mariucci became the head coach of the Minnesota Golden Gophers hockey team. He was noted for not attempting to sign Canadian players for his hockey teams, but instead relying on home-grown talent from Minnesota, which was a major reason why the game spread faster in the Gopher state than anywhere else in the United States, between 1952 and 1980 the number of high school teams grew from a handful to more than 150.. This reliance helped to grow youth and high school hockey programs in the state of Minnesota. He was coach at the university from the 1952-53 season until the 1965-66 season, except for the 1955-56 season in which he was the head coach of the US Olympic team that won a silver medal at the Cortina games. He returned to the international scene twenty years later as the head coach of the United States team at the 1976 and 1977 Ice Hockey World Championships.

In 1967, he was named the assistant to general manager for the Minnesota North Stars. He held that position until his death in 1987. The Minnesota North Stars commemorated Mariucci with a JM patch on their jerseys for the 87-88 season. Mariucci was a charter member of the U.S. Hockey Hall of Fame, and also won the NHL's Lester Patrick award in 1977 for contributions to hockey in the United States. He was inducted into the Hockey Hall of Fame in 1985.

The University of Minnesota honored him by first renaming the hockey arena in Williams Arena after him (Mariucci Arena) and later when a new hockey arena was opened in 1993, the school transferred his name to that one as well. Mariucci is a member of both the United States Hockey Hall of Fame and the NHL Hockey Hall of Fame in the "Builders" category.

The inscription for John Mariucci at the United States Hockey Hall of Fame begins with this statement: "The name of John Mariucci is indelibly etched into the history of American Hockey as well as that of his native Minnesota. He has, in the words of an old but appropriate cliche, become a legend in his own time." In Mariucci's old hometown of Eveleth MN at the USHHoF a statue was ressurected to commemerate the late great John Mariucci.

For more than four decades, his career has impacted American hockey on all levels, both amateur and professional. He is the only one to have been inducted into the United States Hockey Hall of Fame as a player and the National Hockey League Hall of Fame as a builder. Mariucci is also a winner of the NHL’s Lester Patrick Award and an enshrinee of the United States All Sports Hall of Fame. During his fourteen years at the University of Minnesota, he coached 11 players to All-America honors and numerous others became U.S. Olympic players. 14 in 1956, he coached the United States Olympic Team to a silver medal. Instrumental in the hockey careers of such figures as 1980 U.S. Olympic Coach Herb Brooks, Calgary Flames Coach Bob Johnson, and North Stars General Manager Lou Nanne, the list of Mariucci proteges is long and varied. John Mariucci’s hockey career began in Eveleth, Minnesota, a small iron mining town in northern Minnesota, where he was inspired by the Canadian professionals on the city’s hockey team. Despite his family’s discouragement, Mariucci played hockey whenever he had free time. After high school, he attended the University of Minnesota, where he lettered in both football and hockey, leading his hockey team to an undefeated AAU Championship in 1940, and winning All-America honors that same year. Turning down offers to play in the National Football League, Mariucci joined the handful of Americans in the National Hockey League, and played defense for the Chicago Blackhawks. Following his professional career, he became head hockey coach at the University of Minnesota, where he is credited with having revived a dying sport statewide. During this time, he also coached the 1956 United States Olympic Hockey Team and received no compensation for an entire year’s work. In 1985, the Williams Arena rink at the University of Minnesota was renamed in his honor. Where Mariucci was quoted as saying; "we'll have to get a broom now and clean this place up since it is named after me." Mariucci also served time as assistant General Manager for the Minnesota North Stars of the National Hockey League. Throughout his career, John Mariucci has been the champion of the American player and has devoted himself to promoting and upgrading American hockey. He is indeed deserving of the title “Godfather of American Hockey.”