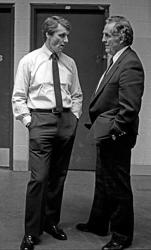 Herbert Paul Brooks (August 5, 1937 – August 11, 2003) was an American ice hockey coach, best known for coaching the U.S. hockey team to a gold medal at the 1980 Winter Olympics fondly known as the "Miracle on Ice." in Lake Placid NY 1980. Born in St. Paul, Minnesota To Herbert Brooks Sr. and Pauline Brooks, he played on the Johnson High School hockey team that won the 1955 state hockey championship. Brooks later played hockey at the University of Minnesota and was a member of the 1964 and 1968 United States Olympic teams. He almost made the1960 Olympic team, only to be cut the week before the Olympic games started. He then sat at home and watched the team he almost made win gold. Later, he coached the University of Minnesota Golden Gophers hockey team to three NCAA championships (1974, 1976, and 1979). He coached St. Cloud State University in the mid-1980s. Widely considered the best hockey coach of all time, and was the first to beat the Soviets in 12 years, which spanned three Olympics.

Brooks later coached in the National Hockey League for the New York Rangers, where he became the fastest coach in Rangers' team history to win 100 games. He also coached the Minnesota North Stars, New Jersey Devils, and Pittsburgh Penguins. He was a long time head scout for the Pittsburgh Penguins from the mid 1990's until the day of his death.He again coached the U.S. hockey team in 2002 at the Winter Olympics, this time winning a silver medal. He also coached France in the 1998 Winter Olympics.

Brooks sadly died in a one-car accident on the afternoon of August 11, 2003, near Forest Lake, Minnesota on Interstate 35, returning from events at the USHHOF in Eveleth, MN. It is believed that Brooks fell asleep behind the wheel before the accident after driving all night, and neither drugs nor alcohol were responsible.

Disney released a film about the 1980 Olympic team in 2004 called Miracle featuring Kurt Russell playing the part of Brooks. Brooks served as a consultant during principal photography, which was completed shortly before his death. At the end of the movie there is a dedication to Brooks. It states at the end, "He never saw it. He lived it." Brooks however, did know Miracle was being made.

Upon the 25th anniversary of the Miracle on Ice, the Olympic ice arena in Lake Placid, New York, where the United States won their gold medal, was renamed Herb Brooks Arena. A statue of Brooks depicting his reaction to the victory in the "Miracle" game was erected in Saint Paul, Minnesota in 2003.

An award was created in Herb Brooks name, the Herb Brooks Award, is awarded at the conclusion of the Minnesota State High School League's state hockey tournament to "the most qualified hockey player in the state tournament who strongly represents the values, characteristics, and traits that defined Herb Brooks."

In Blaine Minnesota there a training center called Herb Brooks Training Center. It trains hockey players and figure skater skills like Brooks wanted to do.

Although much is made of the significant contributions made by Herb Brooks to the 1980 US Olympic gold medal 'Miracle on Ice,' it overshadows the remainder of a remarkable career for this life-long hockey coach. Herb dreamt of a professional hockey career like most young players. His St. Paul Johnson High School collected Minnesota's high school hockey championship in 1955, fuelled in part by two goals from Brooks in the championship contest. Herb later played for the University of Minnesota Golden Gophers between 1955 and 1959. His international successes began early. As a player, Herb was a member of the United States National Team during two Olympic Games, and participated in five World Championships.

After coaching Team USA at the 1979 World Championship, Brooks was named general manager and head coach of Team USA for the 1980 Winter Olympics. The team astonished the hockey world by collecting the gold medal in a triumph that has been heralded by the press as the 'Miracle On Ice.'

After the 1980 Olympics, Herb coached Davos of the Swiss League for one season, then joined the New York Rangers from 1981 to 1985. During his tenure in New York, Brooks earned renown for reaching the 100-win plateau faster than any previous Rangers coach and was named The Sporting News' Coach of the Year in 1981-82.

After a season coaching St. Cloud State University, Herb became the first Minnesota native to coach the Minnesota North Stars when he joined the franchise in 1987-88. He later coached the New Jersey Devils in 1992-93 and the Pittsburgh Penguins in 1999-2000.

Through his NHL coaching career, Herb Brooks compiled a record of 219 wins, 221 losses and 66 ties during regular season play, and 19 wins and 21 losses in playoff contests.

As a member of the gold medal-winning United States Olympic Team in 1980, Brooks and his team were awarded the Lester Patrick Trophy for contributions to American hockey in 1980. He earned the same honour as an individual in 2002. In 1990, Herb was honoured by being inducted into the United States Hockey Hall of Fame, earning election to the International Ice Hockey Federation's Hall of Fame in 1999. Herb Brooks was inducted into the Hockey Hall of Fame in 2006, his life tragically ended in a single car accident in Forest Lake, Minnesota on August 11, 2003.

"You know, Willie Wonka said it best: We are the makers of dreams, the dreamers of dreams," Brooks said. "We should be dreaming. We grew up as kids having dreams, but now we're too sophisticated as adults, as a nation. We stopped dreaming. We should always have dreams. "I'm a dreamer." Herbie