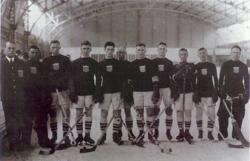 Through the years Minnesota players have played and important role in the Winter Olympic games. The first ice hockey games, as part of the Summer Olympic games, were played in 1920 at the small ice palace in Antwerp, Belgium. Canada, United States, Czechoslovakia, Switzerland, France, Sweden, and Belgium entered the unofficial tournament. Six of the players on the U.S. team were born and reared American citizens- Goheen, Conroy, Fitzgerald, and Weidenborner of St. Paul and Green and Tuck of Boston, while the remainder were Canadian players in the USAHA with the Pittsburgh and Boston teams. The U.S. had a strong team losing to the Winnipeg Falcons (Canada's entry), 2-0 for the second place honors.

In 1924 several Minnesota players refused, for one reason or another, to join the team to compete in the tournament, which was held in Chamonix, France.  Conroy and Goheen of St. Paul, Anderson and Olson of Duluth, and Des Jardins of the Eveleth Reds were among those that decided not to join the team. The U.S. team finished runner-up to Canada, losing 6-1 to them.

The U.S. did not send a team to the 1928 Winter Olympic games held in St. Moritz, Switzerland. Eveleth Junior College, Augsburg College, University of Minnesota, Harvard. and the University Club of Boston were those considered by the AAU committee torepresent the country. Either for lack of finances or students missing classes, all of the teams but Augsburg declined the opportunity. Augsburg formulated plans to attend, but General Douglas MacArthur, Chairman of the American Olympic Committee, refused to approve the Minneapolis college as a choice. He termed the Augsburg team, led by the five Hansen brothers, as "not representative of American hockey." The Hansen brothers were American born but had spent part of their lives in Canada. The final outcome was that no team represented the United States at the 1928 Winter Olympic games.

Only two European nations, Poland and Germany, entered the 1932 Winter Olympic games held at Lake Placid, New York. Canada and the United States were the other two entries to form a double round robin tournament. In late 1931 and early 1932 the AAU set up a series of sectional playoffs in the country. The University of Minnesota defeated Eveleth Junior College and the Upper Peninsular All-Stars in the western playoffs. Minnesota lost to the Eastern All-Stars in a game played in Boston. By virtue of its victory, the Eastern All-Stars gained the honor of entering the Olympics. No players from the west were added to the final team. During the thirties and forties Minnesota players were given scant attention by the AAU's entrenched Eastern establishment. Minnesota was producing large numbers of professional players compared to the number from the East during this period. The 1940 and 1944 Olympic games were canceled because of World War II. The University of Minnesota won the National AAU title in 1940 and several of their players such as John Mariucci, Marty Falk, Babe Paulsen, Frank St. Vincent, and Fred Junger undoubtedly would have made the 1940 U.S. team of the Olympic games had not been canceled.  Under the dynamic leadership of Manager Bob Ridder of St. Paul, the 1952 team was successfully organized and financed, coached by Connie Pleban of Eveleth. The team played several games in Europe before arriving in Oslo, Norway for the winter Olympic games, where they won a silver medal with a 6-1-1 record. Members of the team included: Ruben Bjorkman, Andre Gambucci, John Noah, Arnold Oss, Robert Rompre, James Sedin, Allen Van, and Ken Yackel.  John Mariucci, University of Minnesota mentor, coached the 1956 team to another silver medal in the Cortina Games. Bob Ridder managed the team for a second time. The 1956 team's roster of Minnesotans was as follows: Wendell Anderson, Eugene Campbell, Gordon Christian, Dick Dougherty, Willard Ikola, John Mayasich, John Matchefts, Dan McKinnon, Dick Meredith, Jack Petroske, and Ed Sampson. Mayasich, Matchefts, and Ikola, all natives of Eveleth, played outstanding hockey for the United States. Wendell Anderson was later elected Governor of Minnesota and became a U.S. Senator.  It was in their own backyard that the 1960 U.S. Olympic team surprised the entire sports world by winning the Olympic crown with an undefeated record at Squaw Valley, California. James Claypool of Duluth was the teams manager while Jack Riley, U.S. Military Academy, coached the squad. " Inspirational leadership from captain Jack Kirrane, brilliant goaltending by Jack McCarten, scoring from the brother combination forwards Christian and Clearys, and strong defensive play from John Mayasich, led the team to its first Olympic ice hockey championship" Quote from the USA Hockey Team Results Book 1920-1986 Other members from Minnesota on the championship team besides Bill and Roger Christian, Jack McCartan, and John Mayasich were Paul Johnson, Dick Meredith, Ed Owen, and Tom Williams. Williams, from Duluth, later went on to a thirteen year career in the NHL. Coached by Murray Williamson of Edina, the U.S. team captured the silver medal in the 1972 winter Olympic games held in Sapporo, Japan. In the final round robin with wins over Czechoslovakia, Finland, and Poland and losses to Sweden, and the Soviet Union, the United States managed a second place finish by virtue of their defeating the Czechs, with whom they were ties in points. Leading scorers for the U.S. were Henry Boucha, Rob Ftorek, Keith Christensen, and Tim Sheehy, while Mike Curran played well in the nets. Other Minnesota natives on the team not mentioned above were: Larry Bader, Charles Brown, James McElmury, Bruce McIntosh, Ron Naslund, Wally Olds, Frank Sanders, and Craig Sarner. In August of 1979 in Bloomington Minnesota, Robert Naslund, Chairman of the AHAUS Hockey Olympic Committee, set up a tryout and training camp for the upcoming 1980 Olympic Games. Herb Brooks, successful University of Minnesota mentor, was chosen coach of the team and Ken Johannson the team manager. During the teams 61 exhibition game schedule, Ralph Jasinski replaced Johannson as team manager. Lake Placid, New York, host to the 1932 winter Olympic games, was again selected as the site for the 1980 games. The Americans won four games and tied on in the preliminary round by defeating Czechoslovakia, Norway, Romania, and West Germany and tyeing Sweden. They defeated the Soviet Union 4-3 and Finland 4-2 in the final round to capture the gold medal. "Mark Johnson led the team in scoring in both the exhibition schedule and the Olympic games. The line of Schneider-Pavelich-Harrington, all products of Minnesota's Iron Range, led the teams four lines in scoring with 17 goals and 20 assists in seven Olympic tournament games. Brilliant goaltending by Jim Craig, who played all seven contests, was a big factor in victory as was the stellar play of defensemen Dave Christian, Ken Morrow, Mike Ramsey, and Bill Baker. Seven of the Minnesota players went on to become regulars in the NHL including: Bill Baker, Dave Christian, Mike Ramsey, Neal Broten, Mark Pavelich, Rob McClanahan, and Steve Christoff."

Quoted in part from the USA Hockey Team Results Book 1920-1986 Other Minnesotans on the team not previously mentioned include: Steve Janaszek, Phil Verchota, and Eric Strobel.