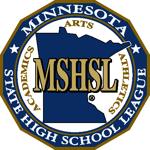 High school hockey in Minnesota predates the official documented start of 1945 by almost 40 years where youth high school hockey can be traced to the late 1890’s to early 1900’s (depending on what source you read or investigate.) The then popular game of ice polo was evolving and hockey was taking over as the more popular winter pastime. Hockey had spread south from Canada to communities such as: Warroad, Roseau, Warren, Hallock, Argyle, Stephen, Thief River Falls, Crookston and Baudette. Hockey eventually flourished in the small range city of Eveleth, and Duluth. As the sport grew in popularity throughout the state in the men’s leagues, more rinks started to emerge and along with it the game of hockey gained tremendous popularity among Minnesota’s youth. The first schools to form a varsity team in Minnesota were: St. Paul Mechanic Arts, St. Paul Central, St. Paul Academy, Minneapolis North, Minneapolis East, Minneapolis West and Minneapolis Central. By 1900 two of the schools, St. Paul Central and St. Paul Mechanic Arts, were playing in a four-team men’s senior amateur circuit called the Twin City Senior Hockey League along with the St. Paul and Minneapolis Hockey Clubs. Most of the games were played at the old Star Roller Rink located at Fourth Avenue and 11th Street, which had been converted from a roller rink with natural ice for hockey in 1900. Several teams that year competed for the state amateur “mythical” championship, which featured teams from Minneapolis, St. Paul, Duluth and Two Harbors. By 1909 Roseau and Warroad began their high school hockey rivalry which continues on today. St. Paul Public High School hockey championships were held for the first time as well in 1909. By 1914 the Minneapolis High School Hockey Conference, which included East, West, North, and Central, as well as the St. Paul City Conference teams: Mechanic Arts, Central, Humboldt and Johnson, whom all maintained their very own school maintained outdoor rinks for team play. During the 1920’s the metro teams - tired of playing each other - began playing the northern teams more frequently. One of the first “north vs. south” games was in 1922 when St. Paul Central defeated Duluth Central (5-3) in Duluth. On March 19, 1923, Eveleth beat St. Paul Mechanic Arts (9-2) for the second state “mythical state championship”, an event that last took place in 1900. By 1926, the Northeastern Minnesota High School League was formed with teams from Duluth (Central and Cathedral) and the Iron Range Cities: Duluth, Eveleth, Chisholm, Virginia and Hibbing. High School hockey nonetheless was very popular throughout the entire state through the mid to late thirties. By 1925 natural ice was installed in the White Bear Lake Hippodrome at the Ramsey County Fairgrounds in White Bear Lake, and it happened to be the only indoor facility in the Twin Cities to possess indoor ice for the next 25 years. With the new White Bear Lake rink in operation the Bears high school team was resurrected and with it became the first Twin City suburb to ice a high school team. By the end of the 1920’s hockey was sponsored by some 25 high schools in Minnesota. The 1930’s however were a difficult time in America during the Great Depression forcing many public schools to drop their hockey programs. While some communities were forced to cancel hockey, others embraced youth hockey as an inexpensive form of entertainment and with it the game flourished. High School hockey briefly resurged in the late 1930’s but was slowed due to the impact of WWII in the early 1940’s. At the conclusion of WWII hockey was thwarted back into popularity not only in youth hockey, but in the college ranks and Minnesota was leading the way with Mr. Gene Aldrich “driving the bus” for youth hockey’s movement in Minnesota.

The late Gene Aldrich, former director of athletics for junior and senior high schools in St. Paul, had one child, a son named John. Gene Aldrich was, in a sense, also the father of another offspring- the annual Minnesota State High School Hockey Tournament, the first and most successful one of its type in the United States. Gene conceived the tournament in 1944, and because of his lobbying it was born in the St. Paul Auditorium shortly past 2 p.m. on Thursday, February 15, 1945, when the Thief River Falls Prowlers, and the White Bear Lake Bears faced off before 856 spectators.

Thief River Falls won that first game 3-2, even though White Bear Lake led 1-0 after one period on a goal at 9:29 bydefenseman George Kieffer, who, starting from his own blue line, carried the puck in alone and shot it past Prowler goalieRalph Engelstad for the tournament’s very first score. (Engelstad much later in life would donate $100 Million+ to the University of North Dakota, and $13.5 Million+ to ThiefRiver Falls to build 2 rinks that bear his name today) And so it began, Minnesota’s biggest single athletic event, since George Kieffer scored that first goal.

The 1945 tournament consisted of eight teams, from so-called “regions” of Minnesota, that were invited to play for three consecutive days, Thursday through Saturday, to determine the state champion. Although the regions (today called classes A and AA) have been realigned and teams now must qualify through playoffs, the basic structure of single-elimination play to determine consolation, third-place, second-place, and championship winners remains the same as it was in the beginning.

Although they fell victims to Eveleth in what is still the worst defeat in tournament history, the Granite Falls Granites of 1945 have become one of the most famous teams in Minnesota hockey lore, especially to those who cheer for the underdog. As did Staples, the Granites came to the tournament without regular uniforms. They were accustomed to playing in long pants and sweatshirts, with perhaps the most storied feature of their outfits being the newspapers and magazines that the players stuffed into their pants for shin guards. At the start of the tournament, Granite Falls was loaned uniforms for the tournament borrowed from St. Paul Monroe High School, although goalie Gorman Velde stuck with his trusty football helmet to help protect himself from the 31 shots that Eveleth whizzed his way. Once the game began, unexpected delays occurred; the Granites were unacquainted with blue lines and offside rules, so referee John Gustafson provided instructions as to how the game was to be played. Granite Falls won its next game, downing Rochester (2-1) in the first round of consolation play on Friday. The Granites came to the tournament the next year for their second and last time, losing both games they played. Of all the teams in the 1945 tournament, only Staples never returned.

In 1945 even the Eveleth team wore pieced-together uniforms. The jerseys were borrowed from the powerful Eveleth Junior College, and the breezers and skates were secondhand from the National Hockey League’s Chicago Blackhawks team, which then trained in Virginia, Minnesota. Eveleth was, however, prepared in the departments that count most: skating, passing, and shooting. With only 28 high schools in Minnesota having hockey squads registered as of 1945, teams such as Eveleth actually played other high schools infrequently; the Golden Bears were usually matched against amateur junior and senior teams from the Iron Range in games in which 20-minute periods, rather than the customary 12-minute periods of high school games, were typical. Accordingly, Eveleth dominated the early tournaments. The 1945 team was, therefore, more than a novelty; Cliff Thompson, who coached Eveleth into 12 tournaments, rated his first championship among his best teams.

With the first tournament over, Aldrich and his financial backer, Elmer Engelbert, assessed its success to decide whether to continue the next year. Aldrich had in fact planned the tournament carefully, arranging for its financing, civic promotion, and news coverage. Receipts from the attendance of 8,434 allowed Aldrich to reimburse Engelbert and then pay expenses. Aldrich had rented the Auditorium for $429.19. Liability insurance was also modest by today’s standards- $58.00. Tickets were printed for $159.84 and sold for commissions of $155.17. Trophies and medals cost $232.66. A major expense was $1,848.34 for lodging and meals for teams at the St. Paul Hotel. The teams also had traveling expenses ranging from $187.00 for Thief River Falls, which came the farthest, down to nothing for the local Washington team. The expenses for the Board of Control of the Minnesota State High School League were $236.50. Officials, trainers, and scorers were paid $242.00. Finally, after the final deduction of $46.12 for miscellaneous expenses (pucks, signs, and towels), a profit of $135.06 remained. This was given to the High School League. So, Aldrich considered the new arrival sufficiently healthy to rate another try in 1946.

Attendance increased to 11,035 for the 1946 tournament, whose balance matured amazingly beyond that if its predecessor; two games went into overtime and seven were decided by one goal. Spurred by a hat-trick by the mysterious “Masked Marvel”, Roseau won the championship game (6-0) over Rochester. Before losing to Roseau, Rochester scored one of the tournament’s first upsets by surprising Eveleth (2-1) in a strange semifinal game. Against Eveleth, coach Cliff Monrud’s Rockets were deployed in their defensive zone to form a cordon around their goalie, Clark Wilder, and sent passes to such forwards as Ray Purvis, who broke away for both Rochester goals. Eveleth took third place by defeating St. Paul Johnson (1-0), and St. Cloud Tech beat White Bear Lake for consolation honors, again (1-0). The other entries were Granite Falls and Minneapolis West. The tournament was now an established event being run both in control, and financially as well by the Minnesota State High School League as it is today.

From 1945 through 1991 the tournament consisted of a single class, eight team tournament instead of the present day two class (AA and A) tournament. Private schools were not allowed to play in the Tournament until the year 1975. In 1992-93, the tournament was composed of Tier I and II teams. This two-year experiment sent the top team from each of the eight sections to the Tier I portion of the tournament and the remaining teams conducted a playoff to determine who would be included in the Tier II tournament. In 1994, the dual class system was adopted and teams were placed into a class structure based on school enrollments.

Since 1994, the MSHSL's process to determine section assignments for boys' hockey is based on school enrollments and activity classifications. The basic premise is to place the largest 64 schools divided into two classes: AA and the remaining high schools in Class A. Both Classes are then divided into 8 Sections each (157 high schools- approximately 256 schools - and over 6,500 participants in total due to cooperative team arrangements) field sanctioned varsity teams competing in the Minnesota State High School League (MSHSL). Teams are placed into their section assignments with geographic location as a primary consideration. High schools initially placed in Class A have the option to play at the Class AA level. 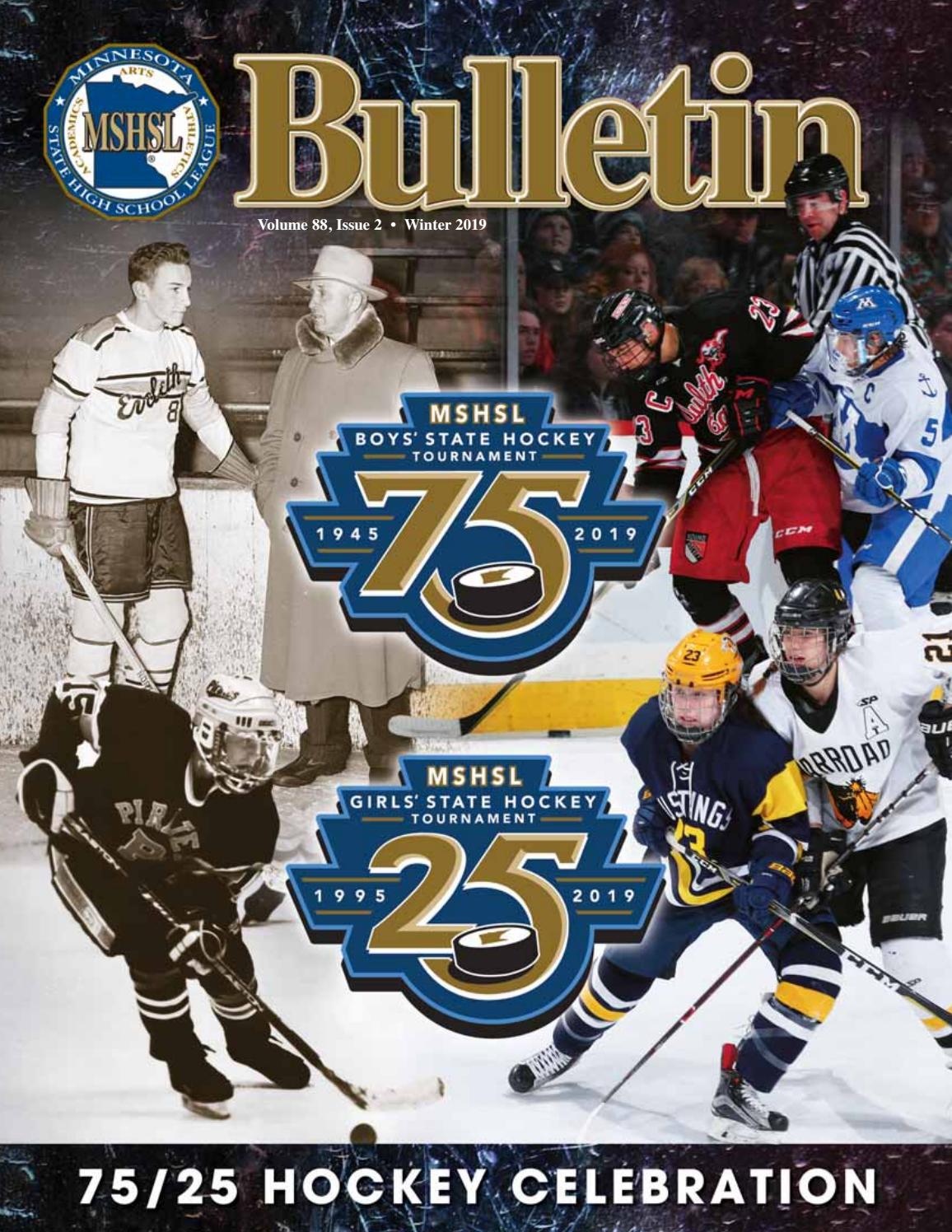 Today having prospered, high school hockey players throughout Minnesota participate in a maximum of 25 contests, excluding the Minnesota State Boys' High School Hockey Tournament. Teams currently play three 17-minute periods to comprise a game. A lengthened period time was recently adopted by the Minnesota State High School League. Boys hockey concludes their season with a four day tournament in March, notably called the “tourney” that features sixteen teams competing for championships in both classes, A and AA. The tournament is now held at the X-cel Energy Center in St. Paul, home of the NHL’s Minnesota Wild. Based on tournament attendance, ice hockey is one of the most popular high school sports in the state. Standing room only crowds converge from around Minnesota to watch the state’s best high school teams in action with record breaking attendance each year of 120,000+ spectators.

The tournament is a showcase for Minnesota sports that can draw on a tradition built by its participants and supporters, who have served in a way befitting that of Gene Aldrich back when it all began in 1945.