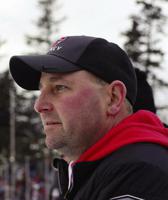 Joe Law is in his twentieth year of coaching high school hockey.  Prior to joining the staff at Centennial High School in 2010, he served as JV/Varsity Assistant for six years and Head Varsity Coach for three years at St. Bernard’s High School.  He then spent two years as the Head Varsity Coach at Coon Rapids High School.  Coach Law has been an active member of the Minnesota Hockey Coaches Association since 2007, serving as the Section 5 Coaches Rep on the Executive Board.  Law has also been involved in the Minnesota Hockey High Performance programs, serving as coach and general manager on numerous occasions.  Joe has recently become active in the White Bear Lake Youth Hockey Association, coaching his son’s PeeWee team and serving as the association’s representative to District 2.  Law grew up on St. Paul’s east side and attended Johnson Senior High where he lettered in both football and hockey.  After graduating, he attended Winona State, then Concordia University-St. Paul for three years where he earned three varsity letters in football.  Coach Law works as a 4th Grade teacher at Golden Lake Elementary in Circle Pines.  He currently lives in White Bear Lake with his wife Angie and their son Matthew.