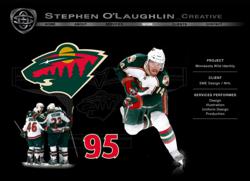 The Minnesota Wild primary logo was designed by Graphic Artist Stephen O'Laughlin while he was employed by SME Branding of N.Y. that was selected. Per SME website, to enliven the selected Minnesota Wild unique nickname, and introduce the newest NHL franchise to the league ahead of the team’s inaugural season in 2000, Minnesota Wild needed a brand identity system that stood out and invigorated a hungry fan base. The identity needed to capture the wilderness and outdoor theme expressed by the “Wild” name, while paying tribute to Minnesota’s longstanding love of hockey.  SME won the heart of Wild leadership after developing 10 different concepts for the Wild’s icon, after they conducted hundreds of one-on-one interviews with fans and leadership to tell a distinct visual story.  The “eye” of the “Wild Animal” is the north star, in tribute to the departed Minnesota North Stars.

“SME created a new identity for our new franchise that captured the spirit of our hockey-loving fans and our rugged outdoor, Minnesota lifestyle. Our visual identity remains one of the finest in all of sports” - Bob Naegele

The Wild Logo is a perfect example of an optical illusion, when one and the same emblem may be interpreted in two ways.  The resulting multi-functional logo, known as the “Wild Animal,” depicts a forest landscape with a stream at dusk inside the silhouette of a nondescript animal head. The logo’s slightly jagged lines denote strength and motion.  Regarded as one of the most intricate and clever identities in sports, the icon seamlessly fits into one cohesive package, comprised of multiple uniforms, wordmarks, including a secondary logo.

The primary logo is built around a forest landscape, depicted at dusk with a star seen in the sky.  The eye of a stylized wild animal, whose silhouette is depicted in the emblem, is the North Star.  This small detail has a deeper meaning, as it is supposed to pay homage to the region’s departed NHL franchise Minnesota North Stars and remind the slogan Le Étoile du Nord - from French The Star of the North.

Due to the optical illusion, a wild animal can be seen in the logo, in addition to the landscape. Although most fans suppose it is a bear or a wild cat, the club does not give any official explanation.  It just states that it is a “wild animal.”  However, the rounded ear and the distinctive neck are some of the arguments in favor of the “bear” theory. 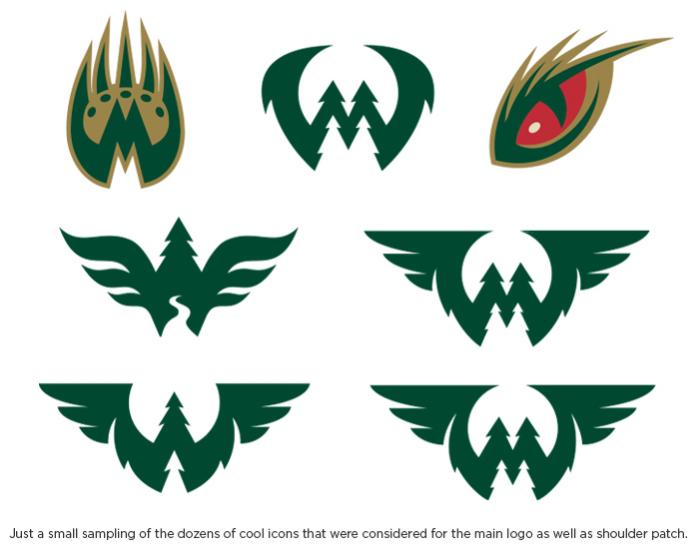