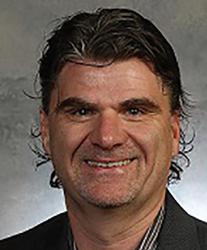 Mike has coached at the youth, high school and college levels since the early 1980’s. In addition he has worked in player and coach development in Minnesota and Nationally. Since 2006 Mike has held the position with the Minnesota High School Hockey Coaches Association (MHCA) as its Executive Director. Mike has served the MHCA since 1997 when he became the associations clinic coordinator as well as serving as Section Rep for Sections 6 and Section 8 from 2000 – 2006. Mike coached at the high school level for 30 years beginning in Menomonie, WI before coaching in New Ulm, MN. Mike retired as the Head Hockey Coach at Buffalo High School in 2011. As the High School Coach, Mike co-chaired the committee to build a new state of the art facility and developed training programs to benefit local players and the local hockey association. Mike has also been recognized by his peers as MHCA Section Coach of the Year, Conference Coach of the Year, 3M Excellence in Coaching Award, and the Dave Peterson Award. In addition Mike was given the Minnesota Hockey President's Award in 2011 and a two-time recipient of the USA Hockey Presidents Award and he was inducted into the Buffalo Hockey Hall of Fame. Mike currently holds the position of USA Hockey National Coach-In-Chief, which oversees the Coaching Education Programs in the United States. He sits on USA Hockey's Youth Council and Player Development Committee also representing the coaching program on other committee’s as directed. He also is the Director of Minnesota Hockey's Reebok High Performance Programs (Player Development) for the State of Minnesota Hockey. In 2014-15 Mike accepted the position as Assistant Coach at Hamline University with responsibilities for goalies and defensemen. In the staff's first year they guided the Pipers to a MIAC Championship and NCAA Division III birth.
Mike was selected as the USA Hockey National Sled Development Head Coach in the fall of 2011, in that capacity he works with athletes competing and training for placement on the USA Hockey National and Olympic Teams.

Mike represented USA Hockey in 2014 as Sled Representative on a US State Department mission with Russia and traveled to 5 cities in Russia over 14 days working with Disabled athletes and meeting with the leaders of disabled sport in Russia. Mike is also a founding member of the Hendrickson Family Foundation, which supports Disabled Hockey (Sled, Special and Wounded Warrior)in Minnesota.

Mike resides in Ramsey with fiance Susie and has two children: Jackie – Head Women’s Coach at the College of St. Scholastica and Michael a Pharmacist with the VA in Los Angeles.