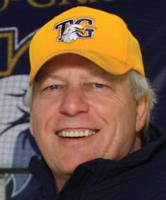 In all walks of life there are people that like to operate in the limelight and those that are more comfortable in the shadows.  Tom Peart is in the latter group.  It is just not in his nature to seek attention or direct the focus onto his work.  The true value of folks like Tom often comes once they seek other challenges, and you miss their effort and ability. Tom Peart has had his hand in just about every aspect of the hockey world for the past 40+ years.  Following graduation from Jefferson High School in Alexandria,MN, he enlisted in the United States Marine Corps.  After separating from the Marines, Tom revived his playing career at Mesabi Community College and Saint Cloud State University.  After earning a degree, Tom served as an assistant at Robbinsdale Armstrong for six years, then became the head coach at Minneapolis Roosevelt for another five.  At Roosevelt, Peart led the Teddies to the 1992 Tier II Minnesota State High School Hockey Tournament.  Tom then moved on to the professional hockey world where he led the Guildford Flames of the British National League for one year then to the college ranks where he coached at Augsburg College.  He returned to prep hockey for a few years, coaching at Buffalo and Wayzata high schools.  In 1997 Tom transitioned to coaching female players.  He accepted a job as the first head coach of the girl’s co-op in Wright County and also became the co-head coach at the College of St. Benedict.  Often Tom would finish practice with Wright County, then get in the car and head west for an hour to his college practice.  After a few more moves, Tom settled at Totino-Grace High School where he stayed from 2009-2015, retiring with over 400 career wins. 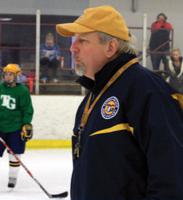