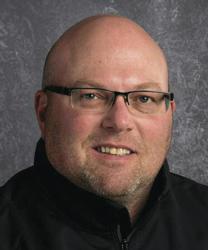 Steve Wasko took the long and winding route to being a hockey coach.   An exceptional athlete while growing up in South St. Paul, Steve earned nine letters playing football, hockey, and baseball before heading south to Iowa Wesleyan College in Mt. Pleasant, IA.  There, Wasko continued his football and baseball careers but the Tigers did not field a hockey team.

Eventually Wasko transferred to Saint Cloud State University (SCSU).  While completing his studies, Head Coach Noel Martin hired Steve to be the Special Teams Coach for the SCSU football team.  Steve excelled in this position and, in 1989, the Huskies won their first North Central Conference championship and a berth in the Division II National Tournament.

Also while attending SCSU, Wasko became an assistant coach for the Princeton HS hockey team.  He helped head coaches Don Dainsberg and Pete Hayes for five years, in all, during which they won three Rum River Conference championships.  Wasko moved on to Simley HS in 1993 where he assisted Pete Bauer and Bob Rajanen.

In the fall of 1994 Wasko accepted an art teaching position at Two Harbors HS.  He assisted Roger Koster in coaching the Agate hockey team for two years before being named the head coach in 1996.  Steve was head coach at Two Harbors for the next 16 years when the program formed a cooperative with Silver Bay and became North Shore.  Wasko co-coached that team for one season with Shawn Bartlette before hanging up his whistle in 2013.  He was named Section 7A Head Coach of the Year in 2012.

Coach Wasko has been active in USA and Minnesota Hockey, coaching teams involved at all levels of the High Performance program and the Ted Brill Great 8 Tournament.  He has been an active participant and contributor to the Minnesota Hockey Coaches Association and has served on their board for the past 17 years as the Section 7A/AA representative.  Steve’s dedication to young athletes and coaches comes from his father, Bob Wasko, who served as President of the Minnesota Baseball Coaches Association in 1975 and is a member of their Hall of Fame.