It all started back in 1974, while Bob Mays daughter Jan was in elementary school, Wayzata started a girls’ team, and Dr. Bob May became the coach. A Canadian by birth, Bob May was a visionary and had a strong coaching resume before he started the Wayzata Checkers girl’s hockey program in 1974.  Prior to that he had coached the Wayzata boys high school team (1954-1955), the Minneapolis Roosevelt boys team (1955-1957), and the University of North Dakota men’s team (1957-1959).

In fact he guided UND to the men’s national championship in 1959, and later was inducted to the UND Hall of Fame. In 1960 he entered dental school, and began his second career as a dentist.  He coached the Wayzata Checkers, (later named the Minnesota Checkers) from 1974-1981. During that time the Checkers won a Minnesota State bantam tournament (1978), three National Championships (1979, 1980, 1981), through AHAUS, now called USA Hockey.  The Checkers also traveled to Finland and Russia in 1979, and competed in the Friendship Tournament in Helsinki, where they took first place in the World Tournament.

Years Later, Bob became the first-ever girls hockey coach for the Wayzata HS Girls Varsity Hockey Team.  During the inaugural ‘94-’95 season the team had a 7-13 record.  In 1995-1996 they were 17-3-2, and Classic Lake Conference Champions with a conference record of 9-0-1.  He was a close friend of Herb Brooks having sesrved as the Minnesota North Stars team Dentist, and convinced Herb to have a girls session at his annual summer camp at Shattuck during the late 1980’s, Bob also wrote 3 books: ”The Hockey Drill Book”, “The Hockey Road: From High School, to College, to Pro”, and “Girls Hockey in Minnesota; Where To From Here?”, for his vision, and dedication to growth of Women's Hockey in Minnesota, Bob was among the inaugural Minnesota Girls Hockey Coaches Association 2013 class induction.  Bob later passed away on 7/20/2014 at age 87.

In 1979, the Minnesota Checkers won the open B Division National Championship, becoming the first girls' or women's hockey team in Minnesota to claim a National title.  Kim Scherek, who scored two goals in a win over the Sloan Rangers, kept a diary of the 1979 tournament, held at the Assabet Valley Sports Center in Concord, Mass. with the following:

"After coming home from Nationals last year, with a mere second place, our team wasn't about to give up.  That title was within our grasp, but the questions was how and when we could get it.  So our goal was set, and, in November, we started out in hopes of making that dream a reality.  So on April 6, we boarded a plane for Boston, Massachusetts, in hopes of returning with a National Title.  Our plane was delayed about a half hour, so it gave us a little more time for our final good-byes.  We arrived to Boston finally about 1 p.m. and a school bus was there to bring us to the motel.

Our first game was that night, supposedly at 8:45, but was delayed more than an hour.  After a long, cold wait, we got into our locker room only to find water everywhere.  It dripped from the ceiling and was a foot deep in the shower. Our game was against the Hudson Kittyhawks.  We were told before the game that we would blow them off the ice. Little did we know what the real outcome would be.  We suffered something called Jet Lag, which causes you to lose a lot of energy only when you fly east.

When we got out on the ice, many were shocked at what they saw.  These girls were only half our size, and we weren't even big ourselves.  Some of them could really fly.  Their size had us so psyched out that we were afraid to hit them. Looking very shaky, we were satisfied with only a 2-0 win.

Going back to the motel, the bus was very quiet.  Even though we won, there wasn't a smile on anyone's face. Things didn't look good from any standpoint. 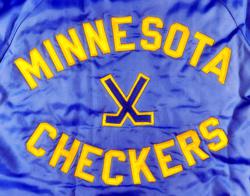 Saturday, we were all up early because our game was at 9:30. Things looked a lot brighter this time.  Now was the time to put everything together so we started new.  The inspiration to our whole game was the talks in the locker room. Dr. May and Mr. Thompsen always seemed to find the right words to say.  To help things along, this time, we all prayed.  No one went on the ice without tears in their eyes and more desire in their hearts.  This game was against Shawsheen.  It was nothing like the night before.  These girls were huge and they hit like bulldozers.  We never let down or got scared. We were there for one purpose and that was to win.  Not many goals were scored by us.  But if bruises were equivalent, we would have killed them. Unfortunately the score was only 4-2.  The trip back to the motel this time was much happier. There was a lot of laughing and joking around.  It started out a good day.

Our next game wasn't until 5 p.m., so we had a lot of time to ourselves. Some of us went out to eat, and some to look for souvenirs.  By this time, the closeness we worked so hard for, had been achieved.  That night we played the Junior Mini Wings.  This promised to be the real championship game.  It was one Mr. Thompsen wanted so badly.  It gave me a lump in my throat just listening to him talk in the locker room.  For the first time, he had asked us to please win the game.  Right before we went on the ice, everyone got on their knees, and Dr. May said a prayer that left tears in the eyes of everyone. I wish there was some way you could bottle the emotion in our locker room, because it was something only the girls on our team will experience.  So on the ice we went, only to find these girls were even bigger than the team before.  They would compare with most high school junior varsity teams and they hit just as hard.  We were getting bounced off the boards faster than we could see what was going to hit us.  Still we outskated them, and outshot them 35-15, but their goalie was unreal.  We just couldn't put a thing past her, no matter how hard we tried. We ended up tying them 1-1. We left the arena very disappointed because there was a feeling of failure to Dr. May and Mr. Thompsen.  We wanted that one so bad just for them.

Now the big question was, who was to go to the finals after the tie.  The determining factors were goals for, to goals against for each team.  Because we hadn't scored many goals prior to this, they were up by 11 goals.  When this was heard, all we could think of was defeat, not so much on the surface, but deep down it was in the hearts of everyone. Going home in third place without losing a game wasn't fair, but one consolation was that, both of us had one remaining game before the championship.

The thing on everyone's mind this time was how we were going to get 11 goals in one game.  We hadn't scored that many in three prior games added together.  Yet, it took more to beat this team.  We were destined for victory, and weren't about to go home without that first-place trophy.  Failure would not be accepted after the obstacles that had been overcome this year.  So every bruised body got as much rest as it could for the big day in store for us on Sunday.

We were all up early to get breakfast and stretch out for the all important game at 10:45.  We all left for the game, and along with us we took every bit of energy, drive, and determination we had.  One hope we had was the Mini Wings could still lose the game before us. But that was shattered when they beat Shawsheen 2-1.  I guess if we wanted something done, we had to do it ourselves. 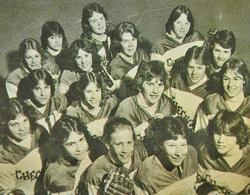 The locker room was filled with 19 very nervous hockey players, about to play a game in which 12 goals were needed to proceed to the finals.  There wasn't a sound from anyone other than Dr. May and Mr. Thompsen.  So out to the ice we ran, and on the ice we flew.  All the drills, hard work and determination all year finally came to us.  Never before had we skated like this, scoring goals as soon as we had control of the puck.  After the first period it was already 6-0, but only scoring two goals in the second, we still had a ways to go.  So the third period we busted it open again with eight more goals to end it 16-0, with shots on goal being 52-2.  I've never truly witnessed a miracle until that day.

Everyone seemed to score, Cindy Galloway, after being in a slump the whole tournament, dumped in five goals.  The fans in the arena cheered as though we had won a championship 1-0 in overtime.  No one knew what our team was truly made of until that point.

After the game, the smiles seemed to be a mile wide, without a sad face in the crowd.  With the exception of the Mini Wings, because they would go home in third place without suffering a single loss.  When we walked out of the arena, they were standing outside our bus with tears in their eyes, just wanting to congratulate us.  I've never known of a team quite like them.  No team has ever shown better sportsmanship.  Along with us, they are also true winners.

But still it wasn't over yet.  For now was the championship game, the one we had to fight to get to.  It was 4:30 p.m., against Cape Cod.  Scoring 16 goals in the game before took so much out of us, but there was still one more left.

Sitting in the locker room before the game, everyone was still talking about the previous game.  But that had to be put aside, at least for now.  Again we went on the ice, only this was the fifth time in three days.  The stands were packed with people from everywhere.  All were cheering for us!

In the beginning of the game we weren't all that tired.  We put in two quick goals, but exhaustion began to set in.  All of a sudden in was 2-2.  It was getting late in the game and nothing was happening.  We suddenly realized it wasn't over yet, and we started to worry.  Then, with very few minutes left on the clock, Laura Halldorson took a pass from Jan for the winning goal.  At last, it was ours!  The National Title was finally ours!

The satisfaction of finally winning overpowered every ache and pain.  It was almost like a numb feeling, but whatever it was, it sure felt good.

No team, in one year, has had greater obstacles to overcome.  The goals we set, were the impossible for many to even dream of, but we achieved them. And above all, we showed all of Minnesota, what 20 dedicated girls, and two dedicated coaches can do as one."