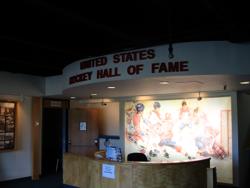 What is in the building to see?

To the right as you enter, you will see a beautiful gift shop with all sorts of United States Hockey Hall of Fame Museum memorabilia and other hockey gifts.  This is where you will pay your admission.  To your left is the theater, where we play hockey videos throughout the day.  Our most popular one being "Do you Believe in Miracles"?  While in Eveleth, be sure to visit Minnesotas' oldest indoor arena - The Eveleth Hippodrome, where countless hockey legends were made - and take your photo with the "Big Stick" in downtown Eveleth. 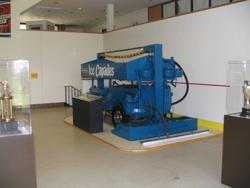 As you walk up the stairs, you will see the "Great Wall", which is the main attraction in the building as it honors the 173 players, Coaches, Referees, Administrators and Builders who have made major contributions to the game of hockey in the United States.  Also, we have three teams that were inducted, the 1960, 1980 Men's Gold Medal Teams, and the 1998 Women's Gold Medal Team.  This particular floor is called the "Great Hall", and you will see on display one of the first Zamboni's ever made - serial #4.  The Wayne Gretzky International Award, the vintage ice skate display, and a USA Hockey exhibit are all on this floor.

When walking up the stairs to the next area, you'll see in front of you the Minnesota Wild Exhibit, with pictures of the arena, their Executive Board, and a few statistics.  This floor, the mezzanine, also houses our gallery of original hockey art, and our library of archives.  On the top floor, the main displays feature the "Tunnel of Hockey History", the old Warming Shack next to the replica rink and shooting area, the Olympic Hockey Heritage display, the Women's Hockey Exhibit,  High School Hockey Exhibit, Collegiate and NHL Exhibit, and a game interactive area with a classic bubble-hockey game.

How long does it take to go through the building?

Depending upon yur interest in the sport of hockey, visitors should allow themselves at least 45 minutes to an hour for the video in the thratre, and an hour or more for the rest of the Hall's display areas. 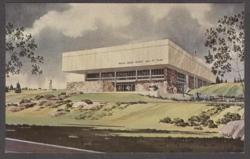 How much did the building cost to create? 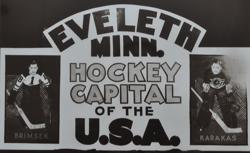 Why is the Hall located in Eveleth, MN?

No city the size of Eveleth has produced more elite players and has contributed as much to all leveles of the game.  Another principal is because of Eveleth's great player contributions.  Many Eveleth players have gone on to the National Hockey League as well as numerous others who have played minor pro, college, and international hockey.  More than give of the first 129 enshrinees are from Eveleth:  Frank Brimsek, Mike Karakas, Sam LoPresti, John Mariucci and Cliff Thompson.

Why aren't there any Canadians in the Hall?

Where does the Hall get their money to operate?

The US Hockey Hall of Fame Museum is a non-profit organization and relies on admissions, gift-shop sales, private donations, corporate grants, public funding, and special events such as the annual United States Hockey Hall of Fame Museum Face-Off Classic Men’s College Game, and the yearly Golf Classic. The Hall has also received sponsorship and grants from USA Hockey, Minnesota Wild and countless others. 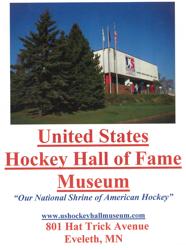 In our effort to protect and preserve our American Hockey Heritage, we hope you will help us by making a tax-deductible donation to the Museum.  Your donation is needed and appreciated.  Please send your donation to: