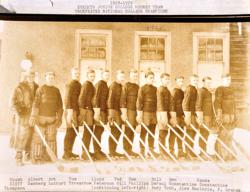 The Eveleth Junior College was the third oldest public junior college in the State of Minnesota.  In 1918, its first year of existence, it had fourteen students.  The college shared science laboratories, and library facilities with the high school. In 1963, the Minnesota State Legislature passed a law providing for the transfer of the public, district-operated junior colleges to state operation and control. (Eveleth Junior College became a state operated institution after July 1, 1964)

Ten years after the school opened, the school added hockey in 1928 at the College, and the J.C. Hockey Squad led by Thompson became an institution in itself.  So good was the team in fact, that in 1928 the Junior College team along with the University Club of Boston, Harvard University, University of Minnesota, and Augsburg College were considered as candidates to represent the Unites States in the 1928 Winter Olympic Games in St. Moritz, Switzerland.  Either for lack of finances or students missing classes, all of the teams except Augsburg declined the opportunity.  However the United States Olympic Committee, under the chairmanship of General Douglas MacArthur, would not approve the team. Consequently, the United States was not represented at the 1928 Winter Games.

Eveleth Junior College was ranked the number one college team in the nation for the 1928-1929 season by the ranking system of Professor Theodore Tonnele of Princeton University. Yale was ranked second, Minnesota third, and Clarkson fourth.  One of the strongest opponents on this team's schedule was Eveleth High School Golden Bears which the Junior College six had a hard time defeating in a 4-3 contest.  That year was one of the best ever for the J.C., as they finished the season undefeated and went on to win college hockey's National Championship.

The Hilltop school, or Eveleth Jaycees as they were listed as in the 1934 "Hilltop school yearbook" went on to additionally capture the 1934 National Intercollegiate Championship in a defeat over the St. Cloud Teachers College Pedagogue's in Chicago.  The Ped's from St. Cloud were composed almost entirely of fomer Thompson Jaycees players.

Cliff Thompson, a former Minneapolis Central and University of Minnesota player, became coach at Eveleth High School in 1926 where he coached the High School team for 32 years, retiring in 1958.  After the Minnesota State High School tournament was inaugurated in St. Paul in 1945, Eveleth won five state titles with those coming in 1945, 1948, 1949, 1950, and 1951. During this era two separate winning streaks of 78 and 58 were established. Thompson's Eveleth Junior College team record was an astonishing 171 wins, 28 losses, and 7 ties record from the 1928-1940 period.  Thompson's high school record was 534-26-9 for a percentage of .946.

Cliff Thompson was inducted into the Inaugural United States Hockey Hall of fame class of 1973.  Part of the write-up inscribed on his pylon reads as follows: "Generations of Eveleth youngsters received hockey instruction from Cliff Thompson, and in addition to his giving them the best hockey leadership he was the object of deep affection that only boys can have for a man as close to them as their coach and teacher.  Many stories are told how Cliff Thompson helped dozens of youngsters get a good pair of skates during the depression."

In our research conducted, hockey is listed within the Hilltopper yearbooks - as shown below - in the mid 1960's for the college with no records given or games played. 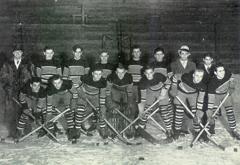 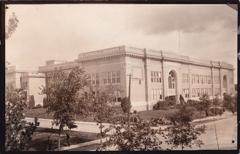