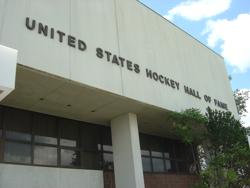 Located at 801 Hat Trick Avenue in Eveleth, MN the United States Hockey Hall of Fame Museum is America's hockey showcase.  The Hall honors and recognizes outstanding coaches, players, builders and administrators who have contributed to the success and promotion of American Hockey.

Eveleth, Minnesota has been designated "The Capital of American Hockey," and is known as the home of the United States Hockey Hall of Fame Museum because of its rich hockey traditions.  No community the size of Eveleth has produced as many quality players or has contributed more to the development of the sport in the United States.  Of the individuals who have been inducted into the Hall, twelve of them are Eveleth natives.  They are as follows: Sam LoPresti, Frank Brimsek, Mike Karakas, Oscar Almquist, John Mayasich, John Mariucci, John Matchefts, Willard Ikola, Connie Pleban, Wally Grant, Serge Gambucci and Doug Palazzari.  Furthermore, the Iron Range and Minnesota in general have had significant impact on US Hockey.

In total, since the Hall's first induction ceremony of June 21, 1973 to today, there is 180+ individuals inducted into the US Hockey Hall of Fame, and 4 teams (1960, 1980 US Mens Olympic hockey teams, 1998 US Womens Olympic hockey team, and the 1996 World Cup of Hockey team).  Each year, nominations are solicited by USA Hockey from those willing to substantiate the candidacy of a particular individual or team for induction from Jan. 1 through March 31.  All nominations are forwarded to the U.S. Hockey Hall of Fame Selection Committee for review.  After a thorough evaluation of each candidate, the selection committee conducts a vote to select the newest members of the Hall of Fame to be placed in our "National Shrine" of American hockey.

The United States Hockey Hall of Fame, the National shrine of American hockey, is dedicated to honoring the sport of ice hockey in the United States by preserving those precious memories nd legends of the game, on all levels, with programs that capture the true spirit and excitement of the sport it represents.