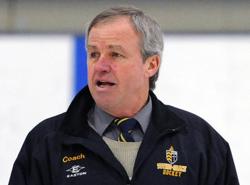 Mark Loahr claimed his 500th career victory in the 2013-2014 season to become the 12th coach in State history to reach that milestone.

Such a milestone is a tribute to his longevity and success as the head coach at his alma mater, from where he graduated in 1970 when it was still Grace high school.  Mark would earn his undergraduate degree from the University of Minnesota in 1976 while serving as an assistant coach at Grace.

The following year he began teaching at Epiphany grade school and, in 1978, began his teaching tenure at Grace, where he was served as a social studies teacher and driver education instructor during his 36+ years at the school.

During his years at Totino-Grace, Mark also coached boys and girls gold, softball and bowling as well as coaching youth hockey and football in both St. Anthony and Roseville for 20 years.

"Mark has provided unshakable stability in the Totino-Grace hockey program for over 30 years:, Mike Smith, Activities Director at the school said.  "He has shown great dedication to our school, our program, our students, and to the game of high school hockey".

"Mark is an alumni of Totino-Grace high school and has been on the teaching and coaching staff for over 30 years.  That is something that just does not happen much anymore.  It speaks highly of Mark that many alumni have come back over the years to join the coaching staff and continue to be a part of the program".

An active and long-time member of the MHCA, Loahr has additionally served on the Executive Board as Section 4 Representative.