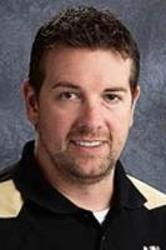 A native of New Ulm, Minn., Macho graduated from New Ulm High School and then attended St. Olaf College in Northfield, Minn., where he played four years of hockey and was a two-year captain.

Scott's father, Tom (2009 Hall of Fame inductee), has fostered his passion for hockey, teaching and coaching as Tom was also a teacher and coach, and started and ran the New Ulm hockey program for 36 years.

Macho holds a bachelor of arts degree in social studies education from St. Olaf College, a masters in eduction from St. Mary's University of Minnesota, as well as a Work Based Learning Licensure from Bemidji State University. He is currently the Mentor Program coordinator at Rosemount High School.

Macho served as a section representative and special projects representative on the Executive Board of the MHCA. He has been involved with Minnesota Hockey as well as USA Hockey, participating in the ADM Education Program, HP 16's, 17's, Great 8 and the National 17 Festival.

The past October, Macho proudly represented MN and USA Hockey as a coach for a group of U.S. high school hockey players in a U.S./Russia bilateral exchange for the Bureau of Education and Cultural Affairs.